Alexander the Macedonian was not only a supreme leader in the battlefield, but also an outstanding liberal personality. He is portrayed more than once in literature as treating women and other religions with respect. In that way he distinguished himself from other governors at all times.

In 323 B.C. Alexander the Macedonian died. The Diadochi took advantage of his helpless descendants and started a power struggle in the Macedonian Empire. As a result of several wars the Empire collapsed, replaced by a few Hellenistic states that sprang on its territory. The greatest one was founded by Seleucus in 312 BC. 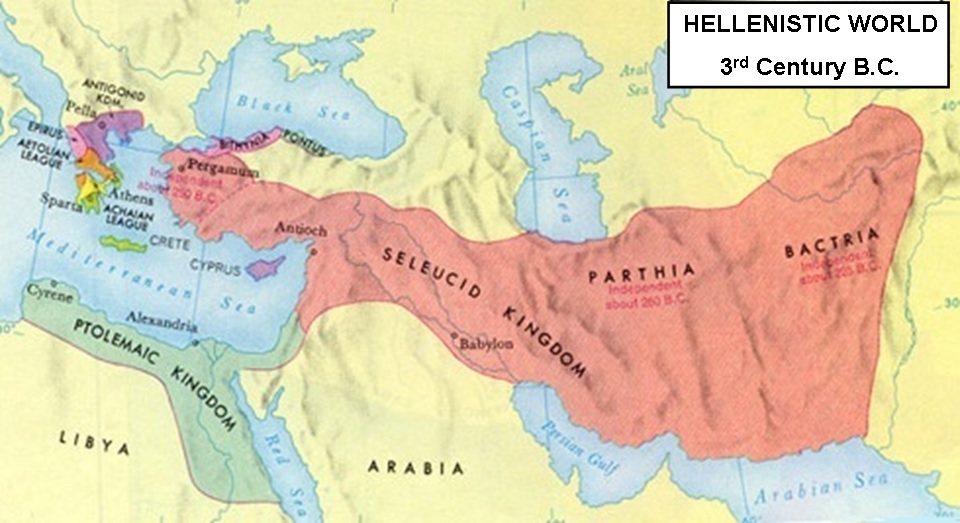 We call them Hellenistic states, but proper ancient inhabitants of Balkans and Peloponnese treated them with disdain. The ancient Greece of 7-2 B.C. was a world center of science, technology, literature, art and democracy. Post Macedonian eastern states adopted Hellenistic religious rituals as a convenient tool to unify the nations enslaved to them. In other respects, the life of their rulers and aristocracy was known for its degeneration and disposition towards earthly pleasures, not to mention their complete rejection of democracy. To call them native carriers of Hellenistic culture would be a distortion of facts – therefore we’ll be referring to their culture as pseudo-Hellenistic in this article.

Imposing pseudo-Hellenistic culture upon the enslaved nations was one of the basic ways that Seleucid and Ptolemies would extend their power. Most of the nations submitted, but not all of them.

In 198 B.C., during a border conflict between the Seleucids and Ptolemies, Jews helped the Seleucid king Antiochus III the Great (ruled 222-187 BC) to expel the Egyptian garrison from Jerusalem. Also, they provided his army with food and equipment.  As a reward, Antiochus officially granted the Jews his permission to practice the religious traditions of their forefathers and bestowed upon the Jews a bill of rights. Thus Judea became the only non-Hellenized country within Seleucid Kingdom.

Antiochus IV Epiphanes (ruled 175-164 BC), the son of Antiochus III the Great, could not tolerate this situation, and came after with the enforced policy of imposing the pseudo-Hellenistic culture upon the Jews.

As a result rebellions spread all over the country between 172-170 BC.  In 170 B.C. Antiochus IV brought in troops to Jerusalem, thus violating the bill of rights. In 168 BC The Jewish Rebellion escalated in Judea,  an then  was violently suppressed  with the assistance of Jewish aristocracy. The pliancy of the few Jewish priests provoked Antiochus IV to make crucial decisions. He turned the Jerusalem Temple into a place of idol worship, climaxing with the ritual slaughter of  a pig at the altar in public.  That time in Jewish history was characterized by persecution, public executions, and violence.

Antiochus IV established new laws, inflicting punishment on everybody who practiced Jewish traditions.  Under the threat of massacre, that sometimes took place, people slowly gave in. Inspired by the success, Antiochus IV  in the year 167 BC enacted a law that forbade what for the Jews resembled the last sign of loyalty to their forefathers’ tradition – death penalty for anyone who circumcises his child. Death for both – father and son.

For those not well informed –  on the eighth day of his life every Jewish male infant undergoes the ceremony of BRIT MILAH (circumcision) – the rite that makes Jewish boy enter the covenant of the patriarch Abraham.

Every Jewish family with a newborn had only 8 days to choose – to abandon the customs of their forefathers’  OR to keep the covenant and for the rest of their lives (!)  to wake up every (!) morning and not to know whether will survive until the end of the day or not.

Simple calculation gives the answer. Somewhere around 1 million Jews lived in Judea  during those days, and the number of battle-worth  men was about 130,000.

The table below, as based on the records of contemporaries, illustrates the correlation of two conflicting forces at different stages of war.

Presumably only 0,5% were men who circumcised their sons and were ready to give up their lives and not betray the tradition of their forefathers.

Dear reader!  I ask you again to imagine and realize feelings of every Jewish family experiences during those eight days after the baby boy is born. The eight days of joy then turned into 8 dreadful days filled with the fear of death mixed with humiliation.  8 days of family debates when common sense in most cases won in favor of saving the life of the price of betrayal. 0.5% alone had passed the trial – they saved the Jewish nation in those bitter times. And 15% alone went into battle preferring death to assimilation.

Today is December the 16, 2014 – happy Hanukah!  Events described in this article took place 2,181 years ago and throughout all these years Jewish families light eight candles on Hanukah to commemorate those eight horrible days. 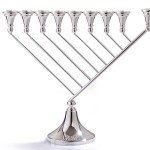