Ascending  the throne of Macedonia in 336 B.C., Alexander reestablished order in his land and the near-by region, and started preparations for the march to the east. The conquest he made was enormous. If it existed today, Alexander’s empire would have been the sixth largest country in the world.

According to many historians, the purpose of Alexander’s  eastern campaign was to conquer Persia.   In this article we’ll share with the reader our doubts on the matter and will suggest a different opinion about the true purpose of this campaign.

Alexander set off from Pella, the Macedonian capital, in the spring of 334 B.C. His army consisted of 35,000 soldiers. It was clear to all that such a number of soldiers is not sufficient for conquering, and all the more so, retaining and controlling such a large territory.

Conclusion N1: The purpose of Alexander’s march was much more modest– he did not plan on capturing Persia. So where did he head for?

After crossing the Hellespont Strait (Dardanelles nowadays) he went southeast along the coast of the Mediterranean Sea. Bypassing from the north the Cilicia, Alexander met the army of Darius III not far from the town of Issus. The Persian troops were defeated in this battle, and Darius escaped east. If the purpose of Alexander’s campaign was the conquest of Persia, then he definitely would have followed Darius in order to smash him. But instead he turned south.

Conclusion N2:  Alexander did not yet intend to capture Persia during the battle of Issus. 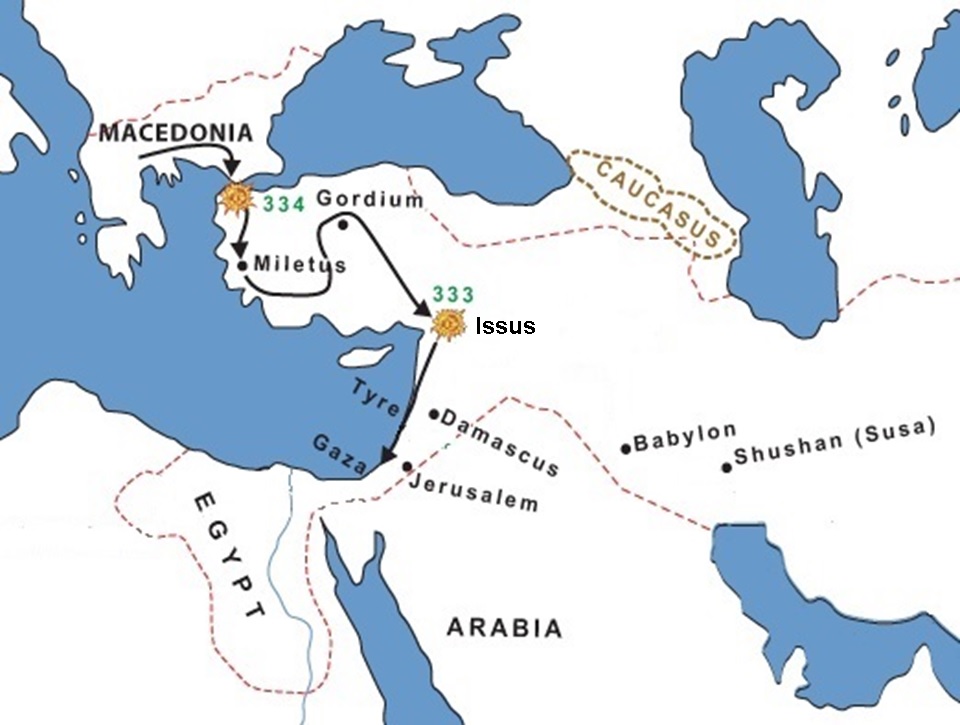 Moving southward along the eastern coast of the Mediterranean Sea, Alexander besieged Tyre. The siege turned out to be a long one. Alexander sends to Jerusalem requests for reinforcement.

Conclusion N3: The relationship between Macedonia and Jerusalem was established a long time before those events. There is an indication of an existing trust and a sense of long standing friendship between the two in sending requests for reinforcement.

After conquering Tyre, Alexander moves further southward and captures the town of Gaza.

Leaving his entire army at the seaside, Alexander, accompanied by a small entourage ascends to Jerusalem. There, at the gates of Jerusalem, quite an unusual event takes place. It is described in different sources, including “The Antiquities of the Jews” by Flavius Josephus.

Quote: “… for Alexander, when he saw the multitude at a distance, in white garments, while the priests stood clothed with fine linen, and the high priest in purple and scarlet clothing, with his mitre on his head, having the golden plate whereon the name of God was engraved, he approached by himself, and adored that name, and first saluted the high priest. The Jews also did all together, with one voice, salute Alexander, and encompass him about; whereupon the kings of Syria and the rest were surprised at what Alexander had done, and supposed him disordered in his mind.” (Translated by William Whiston in 1737)

Conclusion N5: Alexander was met with a welcoming party from Jerusalem that were waiting for his visit ,and they were confident he comes with friendly intentions, despite refusing his request for military aid during the siege of Tyre.

Conclusion N6: Alexander considered the High-Priest to be his superior.

These events take place in September 333 B.C. Alexander visits Jerusalem during the Jewish holidays of Rosh Hashana , Yom Kippur, Sukkot, and Simchat Torah. He brings a sacrifice for the Temple and converses with highly respected people of the city.

Here we ask the reader to pay attention to these 3 facts:

Conclusion N7: The relationship between Alexander and Jerusalem had a previous history which we are not privy to, and this relationship was based on mutual regard and trust of the highest level. It is possible that specifically his visit to Jerusalem was the original purpose of the eastern campaign.

During his stay in Jerusalem Alexander collects information about the Exodus from Egypt and Babylonian captivity. He seems to find out something important about the history of his family. Just here and now Alexander decides to go to Egypt. This decision possibly had strategic, political or economic reasons also. But the main reason was completely different – we’ll mention it a few lines below.

Conclusion N8: When leaving Jerusalem for Egypt Alexander did not yet plan to capture Persia.

Egypt surrendered to Alexander without resistance. Alexander is busy with the logistics of a new-captured land, and he lays the foundation stone of the city of Alexandria. Afterwards he acts in a way that requires, if not an explanation then some speculation at least. While accompanied by a small entourage he goes out for a dangerous journey through 800 km of desert, in order to visit the Temple of Amun in the Siva Oasis. 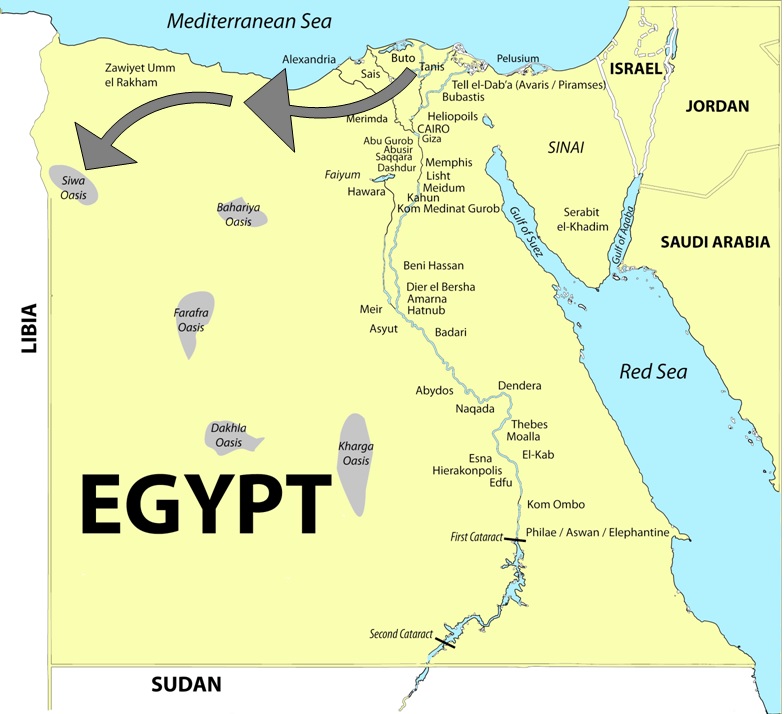 The Temple was built in the Siva Oasis by Jewish shepherds in the middle of XVI century B.C., i.e., around 80-100 years after forefather Jacob’s resettlement in Egypt. The word Amun/Amuna does not have any meaning in the Ancient Egyptian language and was used as a synonym of the word God. In Hebrew, though   אמון/אמונה = [Eng] faith/trust. Presumably ancient Jews were using this building for the purpose of worship, i.e. it was their בית אמונה [beit emuna] = house of faith, or house of worship ,or in modern language, a synagogue. Perhaps, this was the first synagogue.

Note! After returning from this journey, Alexander wrote a will in which he stipulated his wish to be buried not in the Macedonian capital Pella, the city he was born in, and not in Alexandria, the city he founded , but next to this temple.

Conclusion N9: Alexander already had gotten the idea of visiting the Temple of Amun during his stay in Jerusalem. Perhaps in Jerusalem he received information that this place had something to do with the history of his family.

At the end of 332 BC Alexander raises his army and heads north. Passing through Damascus the army enters the northern part of Mesopotamia. Here on the first of October 331 B.C., next to the Jewish settlement of Gaugamella = (Heb) גב גמל [gav gamal] = (Eng) camel’s back. Alexander’s army fights and defeats the army of Darius III , which outnumbers his force more than double its size.

The Persian king Darius escapes east yet. Alexander does not pursue him, but directs the army south, towards Babylon and Susa (Shushan).

Conclusion N10: After the victory of Gaugamella, Alexander still had yet intended to capture Persia.

He goes to the place where a great many Jews were deported during the invasion of the Babylonian king Nebuchadnezzar in 598-582 BC, that is, 250 years before the events described. It was a liberating campaign to Babylon – home of the Babylonian Talmud, and Susa, where Esther and Mordechai defeated anti-Semites, and Jews all over the world celebrate their victory on Purim.

By setting free Mesopotamia Alexander completed the first part of the eastern campaign.

Only now he went to conquer Persia. What for? Many will say: “In order to conquer Persia!” This answer does not seem justifiable to us. So far his conquests were not an end to itself – he walked in the footsteps of his ancestors, to the place where his nation dwelt, and to visit and set them free – this was a matter of high importance to him. What in the world was he searching in Persia and India? Were they not the lost tribes of Israel? 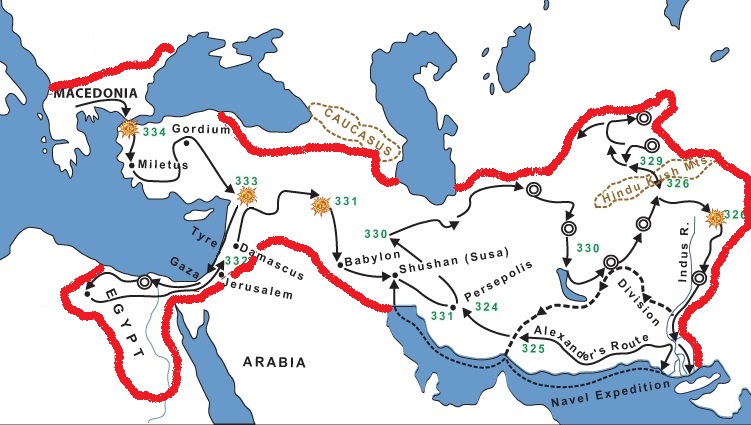 Alexander died of disease in Babylon on June 13, 323 BC, at the age of 33. His body was transported from Babylon to Alexandria, then the traces of it were lost and his place of burial is considered unknown.

5 thoughts on “Alexander the Great – him too?”