A FEW WORDS ABOUT THE PAST

In the middle of the 17th century B.C. the population of Egypt lived a settled way of life and was engaged in agriculture and public works. When the Jews came to Egypt, they successfully filled a gap in its economic structure, as their occupations were animal breeding and trade. A big part of the Jews engaged in trade left Egypt between the 15th and 14th centuries B.C. and settled on the coast and islands of the Mediterranean Sea. The Jews from the tribe of Dan founded the city of Mycenae. They called the Danayans (from the hebrew word דנאי [danai], i.e. the Dan man) or the Danaans (from the hebrew word דן [dan]). The Jews from other tribes, settled in the Aegean Sea, got the name of Achaeans (from the hebrew word אחי [achi]) – for more details see the article “Exodus: Behind the Scenes“.

In the beginning of the 14th century B.C. the interior territories of Asia Minor (the territory of modern Turkey) were inhabited by mixture of the Semites who had arrived there from the east at different periods of time. There were settlements of the Assyrians and settlements of people arrived from other places. The Assyrians called them (Heb) חתים [hetim] → (Eng) the Hittites. These people did not identify themselves as one nation.

In the 14th century B.C. the Danaans and the Achaeans were actively exploring the coast of Asia Minor. The territories where they settled are marked on the map with yellow. 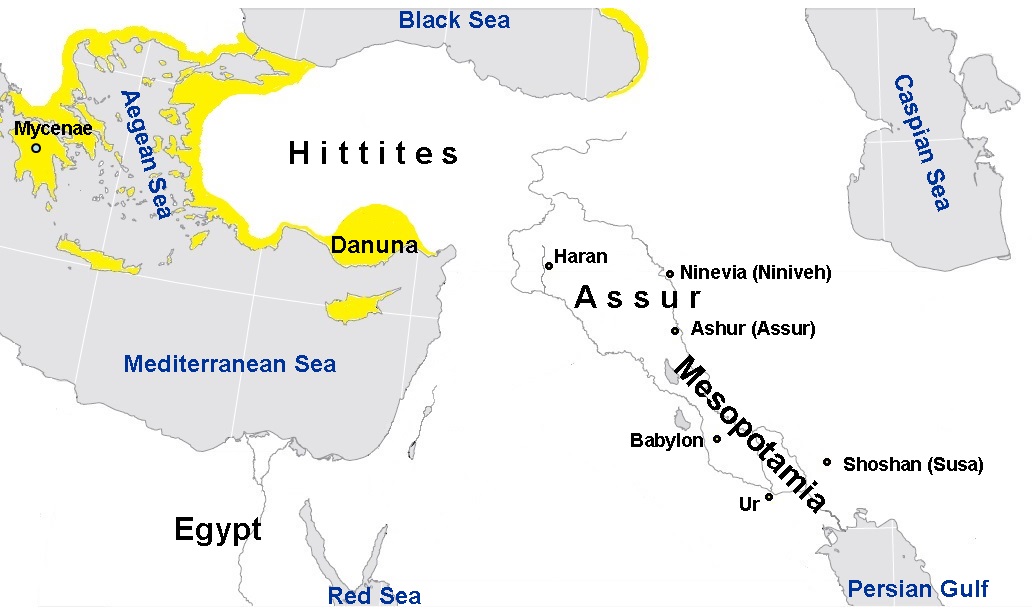 On the southern coast of Asia Minor, opposite the island of Cyprus, the Danaans founded a group of settlements under the name of Danuna or Danone. Nowadays there is a big Turkish city of Adana here. Its name came from the Aramaic word אדנא [adana], which means the Dan.

They brought with them manufacturing technology for iron weapons and iron instruments (see the article “Who are you, Pharaoh?“). They used chariots not only in battle, but also for trade purposes and for exchanging information. These new technologies gave the kings of the Hittites the possibility of controlling large territories of Asia Minor, which are today known as the Hittite Empire.

The main trade route of that time, which connected Mesopotamia and Egypt, was on the Euphrates River ((Heb) הפרת [haprat]) and along the Mediterranean coast – the red line on the map. 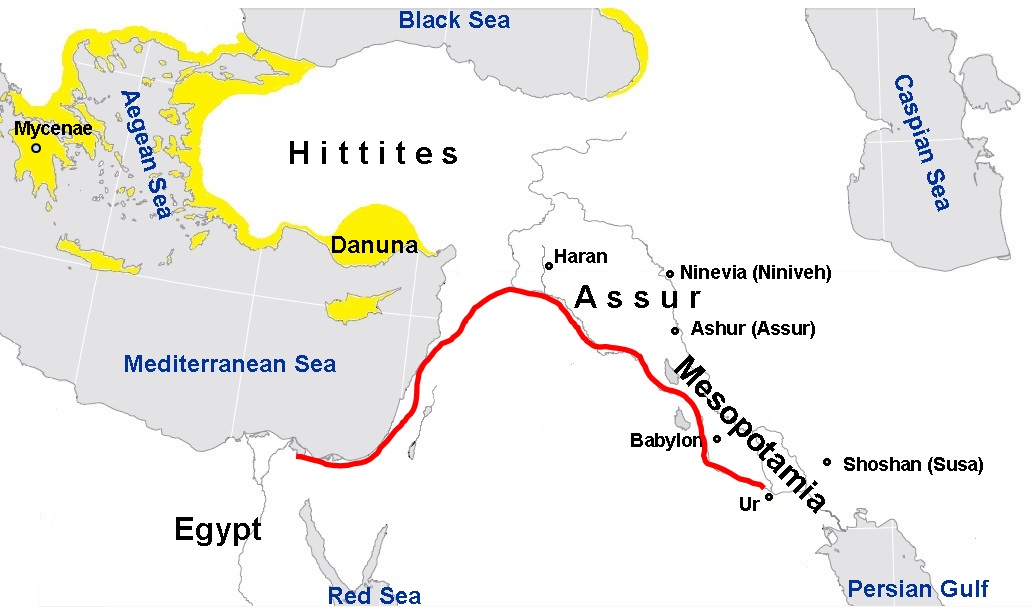 In the end of the 14th century B.C. the Danaans together with the Hittites established control over the central part of this route, which resulted in the following consequences:

–   Collecting dues from the caravans moving from Assyria and Mesopotamia to Egypt made the trade with Egypt unprofitable.

–   Part of the trade caravans of Assyria and Mesopotamia was redirected to the west, to the Hittites and the Balkan Peninsula – the green line on the map. 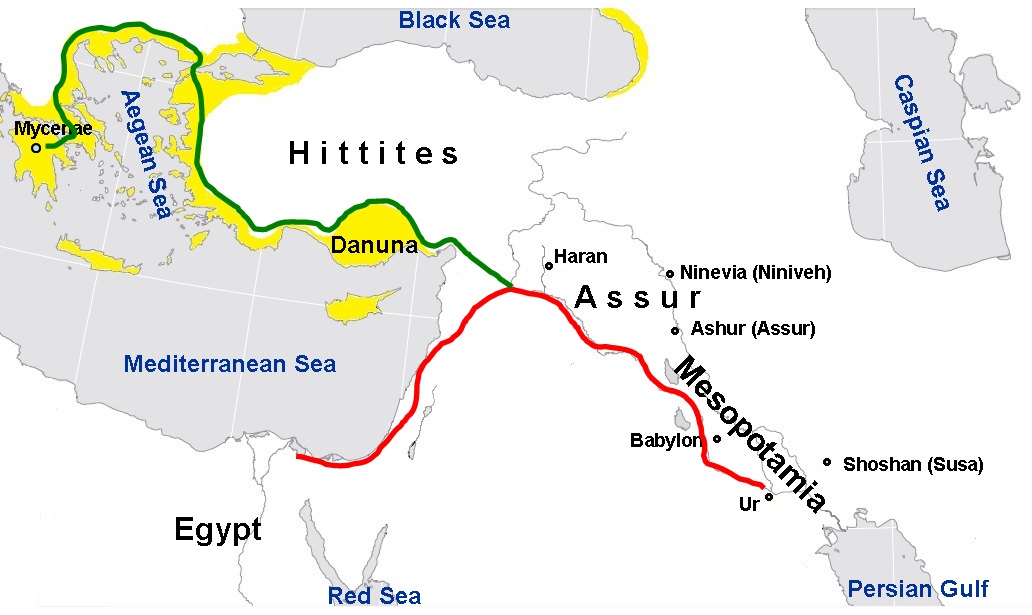 International trade of Egypt declined. In 1274 B.C. Pharaoh Ramesses II led his army to the north to solve the problem. The army of the Hittites and the Danaans went towards them. 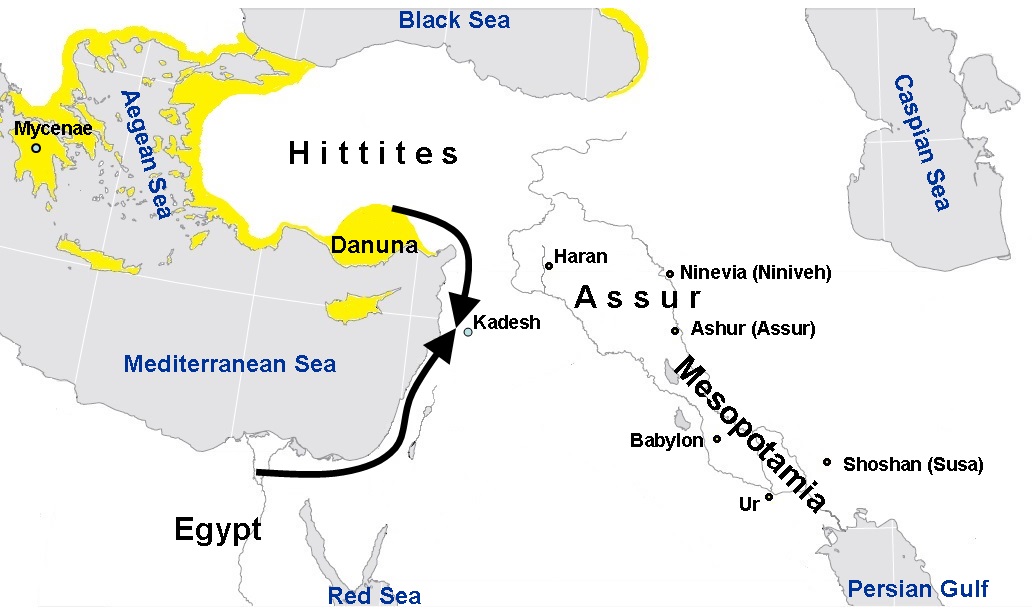 The greatest, by that time, battle took place. We know the size of the Egyptian forces that took part in the battle: 16,000 soldiers and 2,000 chariots.

There was no clear winner in the battle of Kadesh, however the most important result of this battle was maintaining the status quo, i.e. Egypt failed to restore the trade with Assyria and Mesopotamia, and as a result did not come out of the economic crisis.

The Danaans moved forward to the south-east up to the Euphrates River and founded a new state – the state of Aram. Since then this state, situated at the crossroads of main trade routes of that time, controlled almost the entire land trade. 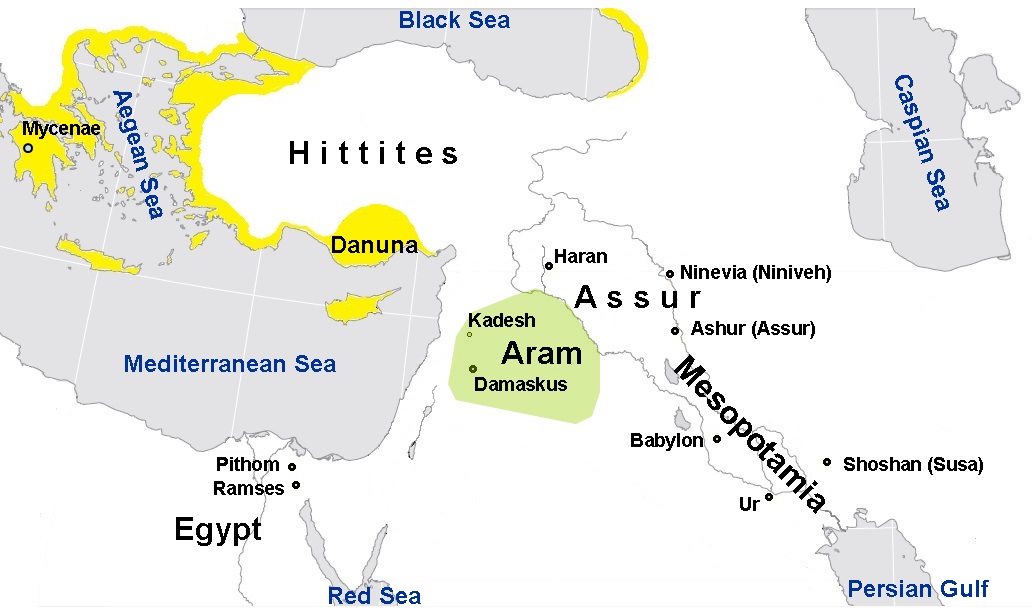 Collapsed economy of Egypt demanded a decision. History teaches us that a dictator, as a rule, is not able to solve economic problems by economic methods, and therefore is looking for someone to rob. It should be noted that participation of the Danaans in the Battle of Kadesh undermined the confidence of the pharaoh Ramesses II in loyalty of the Jewish population of Egypt. It is quite logical that the Pharaoh decided to rob first of all those of his people, whom he considered unreliable. Thus, it was the beginning of that period in the Jewish history, which is identified with the Egyptian slavery:

1,8 Now there arose a new king over Egypt, who knew not Joseph. 1,9 And he said unto his people: ‘Behold, the people of the children of Israel are too many and too mighty for us; 1,10 come, let us deal wisely with them, lest they multiply, and it come to pass, that, when there befalleth us any war, they also join themselves unto our enemies, and fight against us, and get them up out of the land.’ 1,11 Therefore they did set over them taskmasters to afflict them with their burdens. And they built for Pharaoh store-cities, Pithom and Raamses. 1,12 But the more they afflicted them, the more they multiplied and the more they spread abroad. And they were adread because of the children of Israel. 1,13 And the Egyptians made the children of Israel to serve with rigour. 1,14 And they made their lives bitter with hard service, in mortar and in brick, and in all manner of service in the field; in all their service, wherein they made them serve with rigour. 1,15 And the king of Egypt spoke to the Hebrew midwives, of whom the name of the one was Shiphrah, and the name of the other Puah; 1,16 and he said: ‘When ye do the office of a midwife to the Hebrew women, ye shall look upon the birthstool: if it be a son, then ye shall kill him; but if it be a daughter, then she shall live.’

And at that very moment in 1274 B.C. Moses was born. After 80 years, this would result in …… – you can read about it in the article “Exodus: Behind the Scenes“.

As mentioned above, between the 15th and 14th centuries B.C. a big part of the Jews emigrated from Egypt and settled in the Aegean Sea region. Then they spread to the east to Asia Minor, took part in the Battle of Kadesh, moved farther to the south-east, and in the 13th century B.C. founded the state of Aram.

For more than 200 years, from the 15th to the 13th centuries B.C., this group, practically separated from the other Jews, formed a dialect (slang) of Hebrew language. After the state of Aram had been founded, this dialect got the status of the separate language called Aramaic, from the word (Heb) ארמית [aramit].

There is no significant difference between the Hebrew and Aramite languages. A person speaking Hebrew after a few lessons will be able to read and understand texts in Aramite.

As an illustration, below are two quotes from the book of the prophet Ezra translated into Hebrew and English:

This is the copy of the letter that they sent to Artahshasta (Artaxerxes) the king, his slaves the men beyond the river … (meaning the Euphrates River).

There have been aggressive kings also over Jerusalem, which have ruled over all beyond the river; and toll was paid unto them.

Two above mentioned quotations show to the reader who knows Hebrew that 90% of the words in Hebrew and Aramaic have the same roots, and the grammar is also very similar.

The main occupations of the Jews of Aram were transit trade and control of trade routes. It was not surprising that to the 12th century B.C. Aramaic spread throughout Western Asia. It became the language of international communications and remained in this status until the end of the 4th century B.C., i.e. until the invasion of Alexander the Great to Asia – see the article “Alexander the Great – him too?“.

WHO ARE THE SHERDEN?

Among the Jews who settled on the islands and the coast of the Mediterranean Sea between the 15th and 14th centuries B.C., there was a group that got very far away from the centers of civilization. They called themselves as (Heb) שרדן [sardan] = (Eng) survivor, capable of surviving.

In the territories where they lived, some names still exist in memory of those people, such as the island of Sardinia, wine Chardonnay, and others.

In European literature this group is called as the Sherden, or Shardana, or Sherdanu.

The Sherdens were good and relieble soldiers. The records of Pharaoh Ramesses II say that he used them as his bodyguards.

Later on, between 1184 and 1154 B.C. the Sherdens participated in the invasion of “The Sea Peoples” to Egypt together with the Danaans and other groups of the Mediterranean Jews with the purpose to give the Jews of Egypt a chance for the Exodus – see the article “Exodus: Behind the Scenes“.