THE ISLAND IN THE NILE RIVER

If you go 800 kilometers from Cairo upstream the Nile River, you will see an island opposite the city of Aswan. Native people call it Island of Elephants. Tourists know it as Elephantine Island, from the ancient Greek name ελεφάντινη [elefantini]. But there are no elephants there and never were.

The first people that arrived to the island in the beginning of the 16th century B.C. noticed big smooth rounded rocks, which looked like elephant’s back, and because of that they gave the name to the island as (Heb) יב [ev], which meant elephant in ancient Hebrew. The word combination “a tooth of an elephant” in ancient Hebrew sounded the following way: היב שן [shen ha-ev]. This word combination entered Modern Hebrew as the word שנהב [shenhav] = (Eng) an elephant’s tooth or ivory.

THE VERY FIRST WAVE OF EMIGRATION

Between 740 and 735 B.C. the Assyrian king Tiglath-Pileser III began the war against Rezin, a king of Aram-Damascus, and his allies, with the king of Israel Pekah among them. In 732 B.C. the Assyrian army invaded Israel from the north and started little by little taking the lands settled by the Israelites. The war lasted for 31 years.

Escaping from the war, the Jews of the Kingdom of Israel went to the south, to the Kingdom of Judea, and farther to Egypt, where they were welcomed by friendly people that had been living in the area of Faiyum since the time of the Egyptian slavery (See the article “Two Exoduses“), i.e. more than 500 years before the described events.

Following the Jews, the Assyrian troops came close to the border with Egypt. The most cautious of the refugees went upstream the Nile River and settled in a place protected on all sides, i.e. on Ev Island. 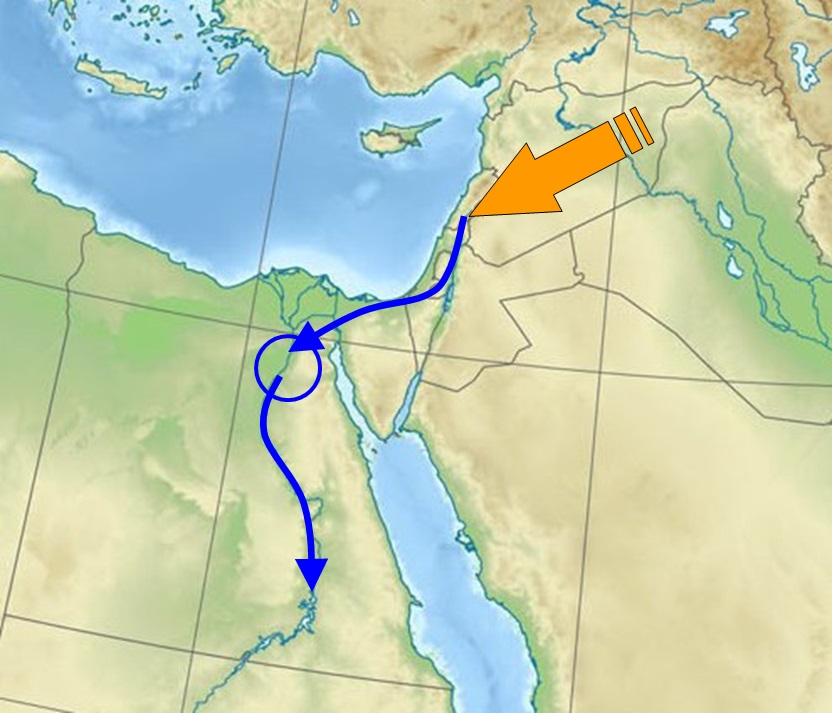 The population of the island was growing. After about 100 years a house of worship was built on the island. It was opened in 610 B.C.

After another 24 years, in 586 B.C., the king Nebuchadnezzar II destroyed the Temple of Jerusalem and deported the Jews of Judea to Babylon – the Kingdom of Judea ceased to exist. The Jews dispersed throughout the world lost their religious center.

And then the Jews of Ev Island turned their house of worship into an ALTERNATIVE Temple. And in this Temple they started to perform those religious ordinances that used to be performed only in the Jerusalem Temple. The Temple on the Island of Ev became a world center of Jewish religious life for a period of 70 years.

After 48 years, in 538 B.C., King Cyrus ordered the Jews, who were in the Babylonian captivity, to return to Jerusalem and to rebuild the Temple.

The construction of the Second Temple of Jerusalem was completed in 516 B.C.

From that time temple worship was performing in two places in parallel: in Jerusalem and on the Island of Ev.

During excavations on the Island of Ev, which were carried out in the 19th century, a lot of written documents describing economic, social, and religious life on the island were found. About 350 registered documents still exist today. These documents show that there was an intense discussion between the religious leaders of Ev Island and Jerusalem about the legality of the situation, when two temples existed at the same time. This discussion lasted for 106 years. In 410 B.C. it was closed because the Temple on the Island of Ev was completely destroyed during the pogrom organized by the Egyptian authorities.

Prophet Muhammad (Mohammad) was born in 571.

At the age of 40, when he began his religious activity, the Mediterranean world was involved in the process of Christianization. In the 7th century, followers of Muhammad created a new state – the Muslim Caliphate (See the article “The Road is paved with Incense“). The territory of the Caliphate exceeded three times the territory of the Byzantine Empire.

During the struggle over spheres of influence, the Byzantine Empire and the Caliphate forcefully converted the population to Christianity and Islam, respectively.

The Jews refused to convert to another religion and were persecuted. The Jews of the Byzantine Empire and the Caliphate were forced to leave their homes and escape.

In the 7th and 8th centuries, the Jews who were living in the western part of the Roman Empire (10-20% of the total number of the Jews) moved to the Iberian Peninsula (modern Spain and Portugal). Most of the Jews of the Byzantine Empire and the Caliphate, including the Jews of Jerusalem, migrated to the territory of the Khazaria between the Black and the Caspian seas. On the map this area is marked with an ellipse. We will need this ellipse in the next part of the article. 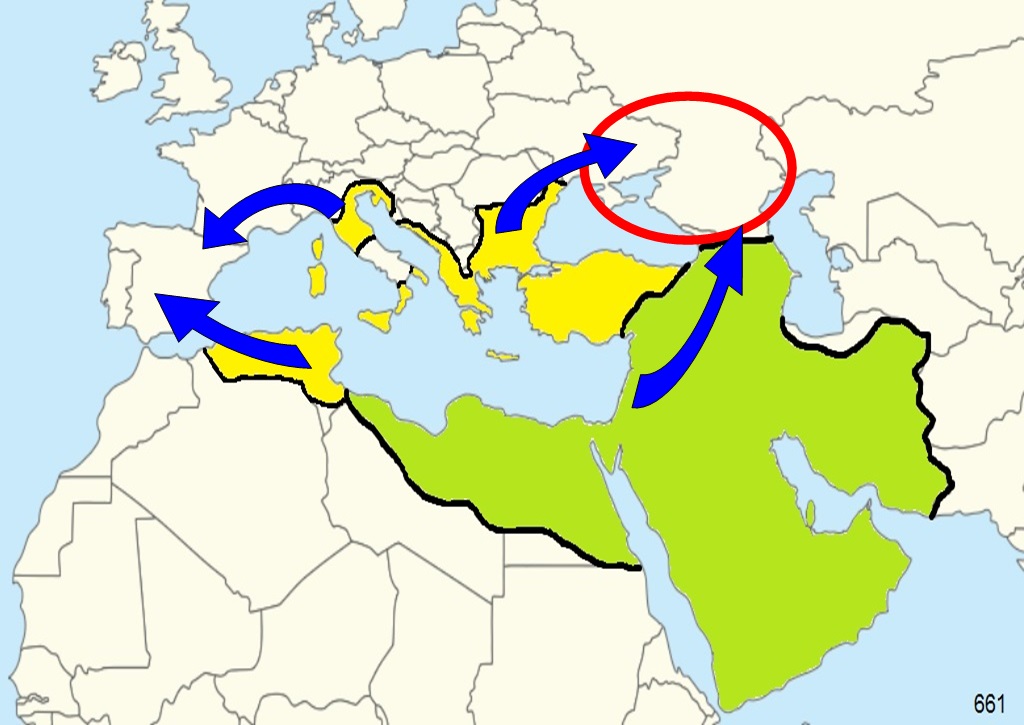 It was the 8th century. The Muslim armies were attacking the southern borders of Khazaria.

Here again, history repeated itself – the events that happened were the same as those in the 8th century B.C. on the Nile River (See above).

The most cautious of the refugees went upstream the Dnieper and settled in a place protected on all sides, i.e. on the island. 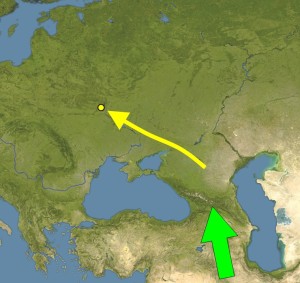 Jerusalem was in hands of the Muslims, and there was no hope for renewal of Jewish religious life there in the near future. The Jews decided to create an alternative Temple, just as it had been done on the Island of Ev 1.600 years before. The temple was built and started to function in the end of 8th century or in the beginning of the 9th century.

In the eyes of the Jews, the island on the Dnieper River was the same as Ev Island on the Nile River in Egypt. The expression “the same as Ev” in Hebrew looks like כִּיֵב [kiev]. Thus the name of the city of Kiev originated.

The Jews, who lived in Kiev, had escaped from different countries. They spoke different dialects of Hebrew and Aramaic languages. The name of the city could be written in different ways according to the dialect, for example:

The so-called “Kiev Letter” is the earliest, of the existing in our time, written document, where the name of the city of Kiev is mentioned. This document was written in Hebrew approximately in 930, and is stored in the Cambridge University Library. 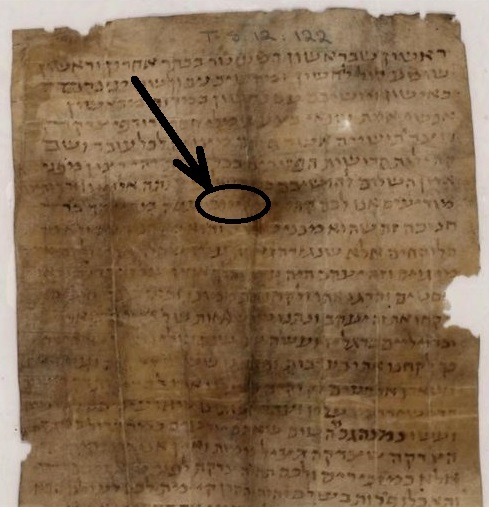 The name of the city of Kiev itself can’t be seen clearly in this document. Some of the scientists, who have hold the document in their hands, claim that the name of the city consists of two words and is written the following way: יוב קי [ki yov]. Perhaps they are right.

In 882, Prince Oleg (Olg), who had arrived to Kiev from Novgorod, said that “this city will be mother to Russian cities.”

Here is a quote from “The Tale of Bygone Years”:

Why was it Oleg who said this?

Why did he say this about Kiev in particular?

Why did he say this about Kiev using these particular words?

Dear Reader, the answers to these questions you can find in the article “Mother of Russian Cities“.

Prince Oleg decided to live on the island near the Temple. His place of residence got the name of Olzhishe, which is translated into modern Russian as Oleg’s, i.e. belonging to Oleg.

There is a verb in Hebrew לטרוח [litroah] = (Eng) to try, to endeavor. The earliest-known written document that used the word with this root more than three thousand years ago was the Torah:

12 How can I myself alone bear your endeavors, and your burdens, and your strifes?

The word טרחן [tarhan] = a person who is trying, or endeavoring, comes from the word לטרוח. During the time of the Khazar Khaganate (between the 8th and the 10th centuries) the word TARKHAN was used for encouragement of persons close to the throne. Later it entered various Eastern languages and became the title/rank of senior military leaders, like the modern rank of General.

It is known that in 764 the Khazar army, led by the commander in the rank of Rosh Tarkhan (in English-language literature as Ras Tarkhan), defeated the Arab forces attacking the Caucasus from the south. The word (Heb) ראש [rosh] means (Eng) head. The title (Heb) טרחן ראש [rosh tarhan] equals the modern rank of “Chief General”.

The Khazars styled Prince Oleg with the title of TARKHAN, therefore the island where he lived was named as Tarkhan Island. Today it is called Trukhanov Island. It was the place where history of the city of Kiev began.

In our days the word TARKHAN still exists in some geographical names, for example: 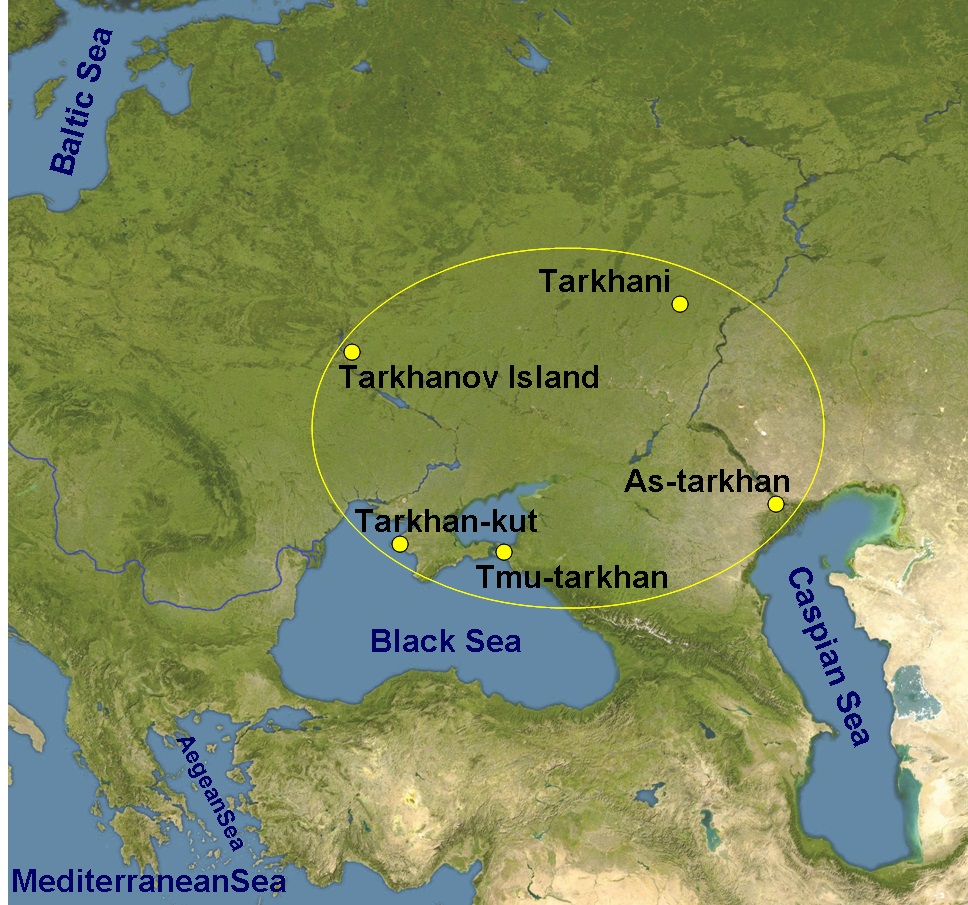