After the failure of the Bar Kokhba revolt, the Senate of the Roman Empire passed a decree establishing a Roman province called Palestine. According to the senate’s plan, this word was to substitue such words as Judea and Israel in the mankind’s vocabulary.

For centuries, oil has been used for lighting, and partially in construction and medicine. In the late 19th century, the development of industrial technology led to a burst of oil demand. At the beginning of the 20th century, the United States gained the first place in oil production and fully satisfied its needs. 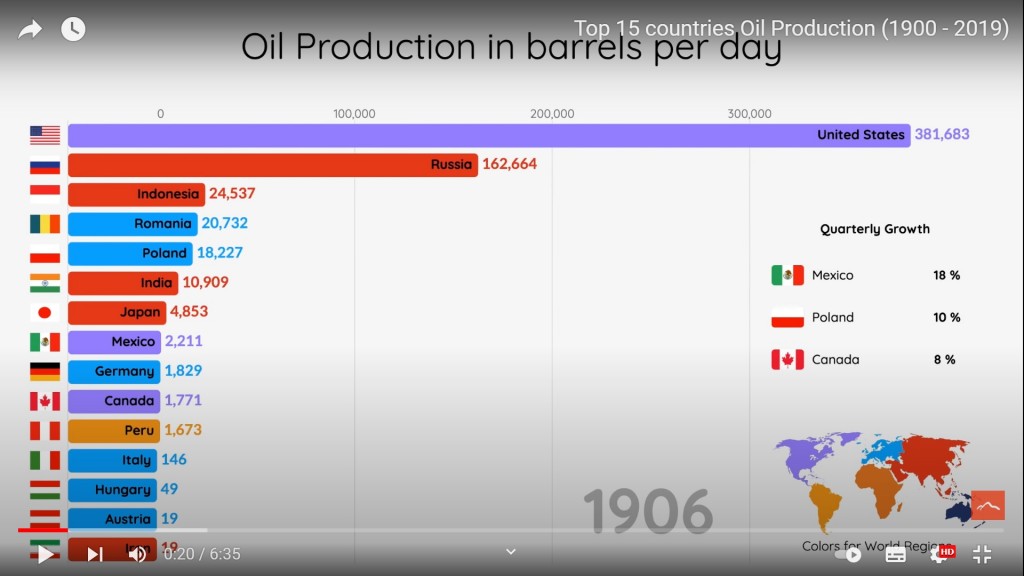 The shortage of oil threatened Europe with economic and military setback in competition with America.

In a feverish blaze of struggle for existence, the countries of Europe began to search for oil throughout the world. Mesopotamia appeared to be the closest large oil-bearing region to Europe. The Ottoman Empire controlled access to the area and, together with Germany, was engaged in oil exploration there. 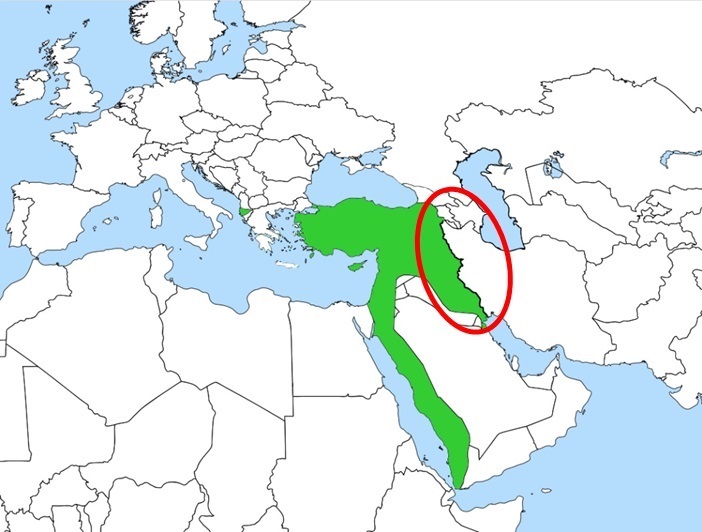 Persia, located east of the Ottoman Empire, was divided into spheres of influence: the north was assigned to Russia, and the west and south were annexed to England.

The discovery and development of large oil fields in the south of Mesopotamia resulted in the construction of an oil refinery on the island (Persian) آبادان Abadan (the northern coast of the Persian Gulf). The refinery was guarded by British warships of a new generation with diesel engines, which were refueled here.

In Sarajevo, the Serbian terrorist Gavrilo Princip killed the heir to the Austro-Hungarian throne, Archduke Franz Ferdinand. This murder ignited World War I.

It ignited the war, but not caused!

The Entente countries (England, France, and Russia) unleashed a war against the Axis powers (Germany, Austria-Hungary, and the Ottoman Empire) to seize oil fields in Mesopotamia. 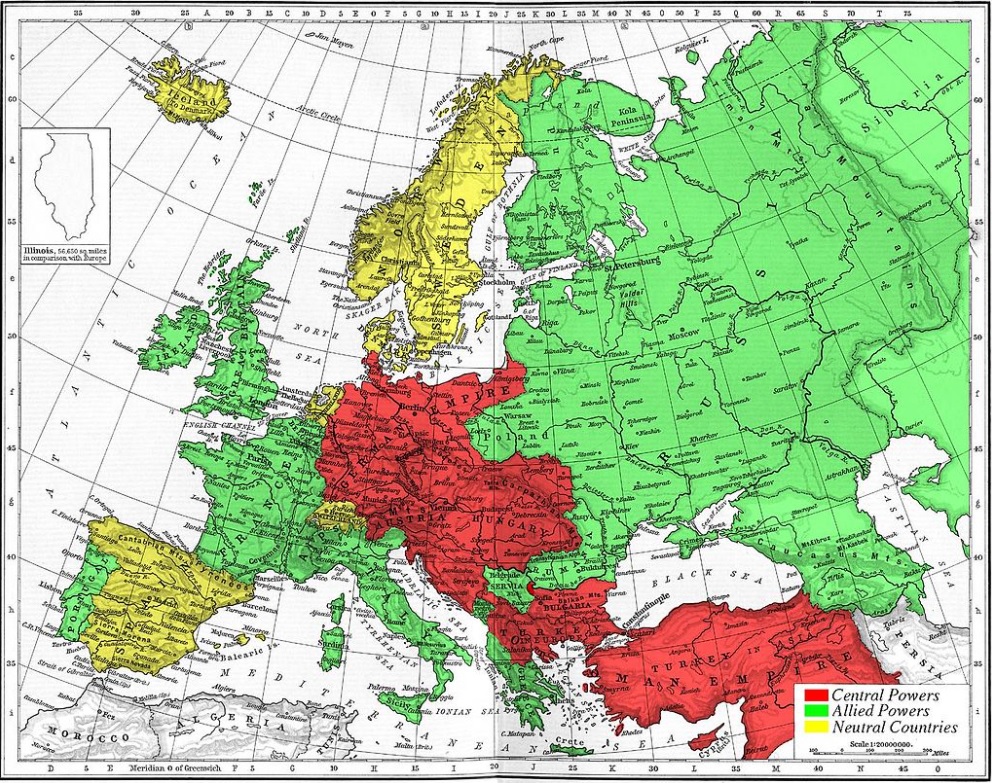 World War I is coming to an end. Geologists report the discovery of huge oil fields in central Mesopotamia. The safest (from the point of view of England) oil delivery route to the Mediterranean will pass through the territories controlled by England. 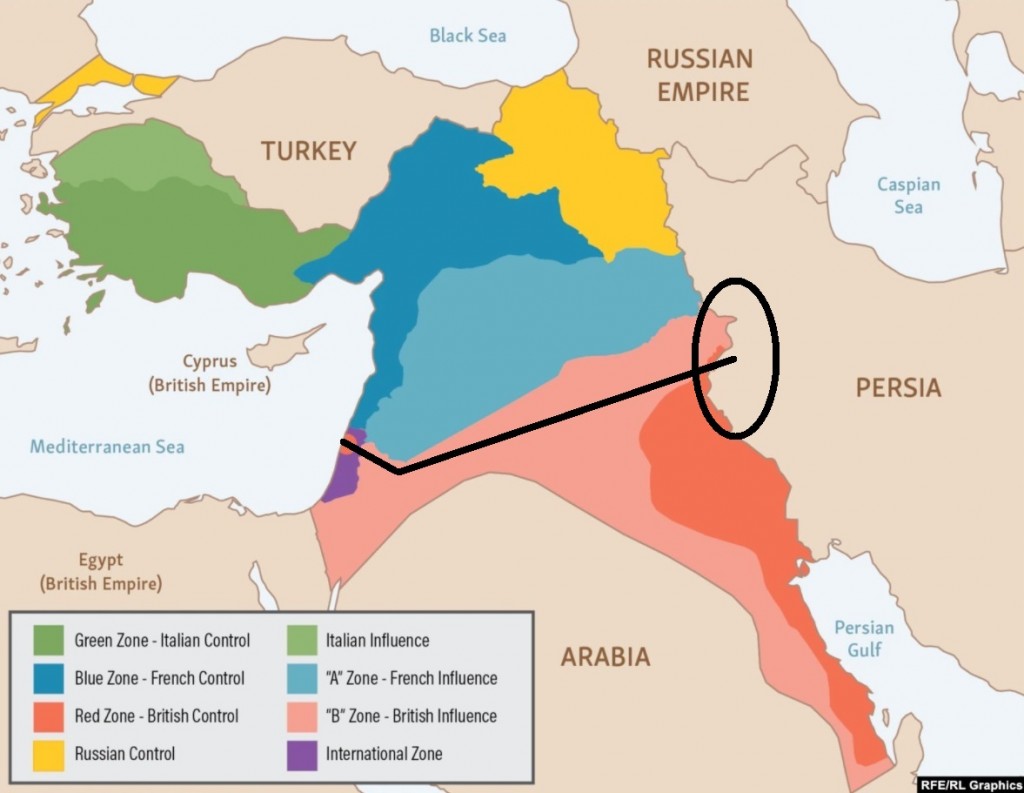 Oil transportation over a distance of 1,000 km is a challenge (there were no oil pipelines in those days). The British government decides to mobilize the Jews’ sentimental attitude towards Palestine to achieve this objective.

Here is the text of Lord Balfour’s declaration:

I have much pleasure in conveying to you, on behalf of His Majesty’s Government, the following declaration of sympathy with Jewish Zionist aspirations which has been submitted to, and approved by, the Cabinet

His Majesty’s Government view with favour the establishment in Palestine of a national home for the Jewish people, and will use their best endeavors to facilitate the achievement of this object, it being clearly understood that nothing shall be done which may prejudice the civil and religious rights of existing non-Jewish communities in Palestine or the rights and political status enjoyed by Jews in any other country.

I should be grateful if you would bring this declaration to the knowledge of the Zionist Federation.

At the end of World War I, a number of agreements were signed (Treaty of Versailles 10.01.1920, Treaty of Sèvres on 10.08.1920, San Remo conference in 1921, the British Mandate in 1922, the French Mandate in 1923), according to which the Middle East and Mesopotamia were divided into spheres of the influence of the winning nations – borders appeared on the map of the Middle East; Palestine and Mesopotamia became a UK mandated territories. 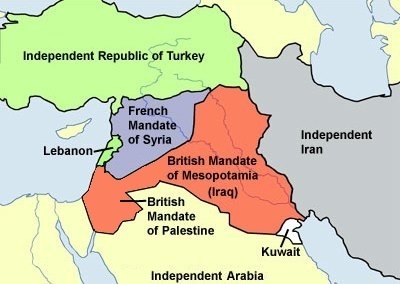 Text of the Mandate for Palestine (selected articles):

Whereas the Principal Allied Powers have also agreed that the Mandatory should be responsible for putting into effect the declaration originally made on November 2nd, 1917, by the Government of His Britannic Majesty, and adopted by the said Powers, in favour of the establishment in Palestine of a national home for the Jewish people, it being clearly understood that nothing should be done which might prejudice the civil and religious rights of existing non-Jewish communities in Palestine, or the rights and political status enjoyed by Jews in any other country; and

Whereas recognition has thereby been given to the historical connection of the Jewish people with Palestine and to the grounds for reconstituting their national home in that country;

The Mandatory shall be responsible for placing the country under such political, administrative and economic conditions as will secure the establishment of the Jewish national home, as laid down in the preamble, and the development of self-governing institutions, and also for safeguarding the civil and religious rights of all the inhabitants of Palestine, irrespective of race and religion.

An appropriate Jewish agency shall be recognised as a public body for the purpose of advising and co-operating with the Administration of Palestine in such economic, social and other matters as may affect the establishment of the Jewish national home and the interests of the Jewish population in Palestine, and, subject always to the control of the Administration, to assist and take part in the development of the country.

The Zionist organisation, so long as its organisation and constitution are in the opinion of the Mandatory appropriate, shall be recognised as such agency. It shall take steps in consultation with His Britannic Majesty’s Government to secure the co-operation of all Jews who are willing to assist in the establishment of the Jewish national home.

The Administration of Palestine, while ensuring that the rights and position of other sections of the population are not prejudiced, shall facilitate Jewish immigration under suitable conditions and shall encourage, in co-operation with the Jewish agency referred to in Article 4, close settlement by Jews on the land, including State lands and waste lands not required for public purposes.

The Administration of Palestine shall be responsible for enacting a nationality law. There shall be included in this law provisions framed so as to facilitate the acquisition of Palestinian citizenship by Jews who take up their permanent residence in Palestine. 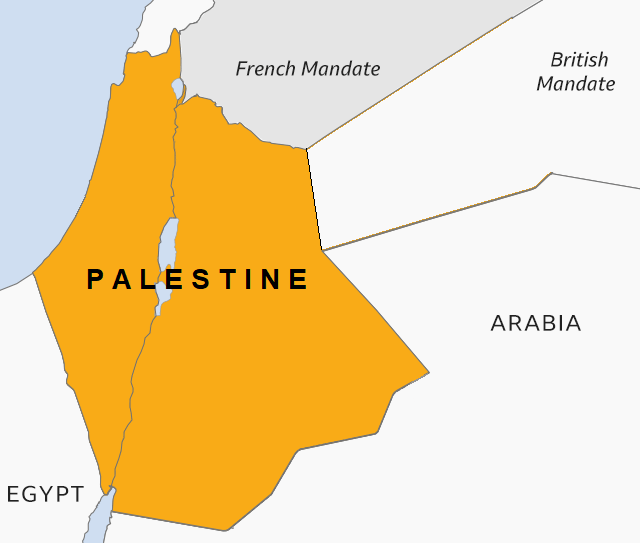 Less than 2 months after establishing the Palestinian Mandate, England divided Palestine and appropriated the territory east of the Jordan River named Transjordan. This was done to invalidate the Balfour Declaration and the Palestinian Mandate regarding this territory. At the same time, a “finger” was attached to Transjordan, pointing northeast in the direction of the oil fields of central Mesopotamia.

Chart 07 – secession of Transjordan from Palestine 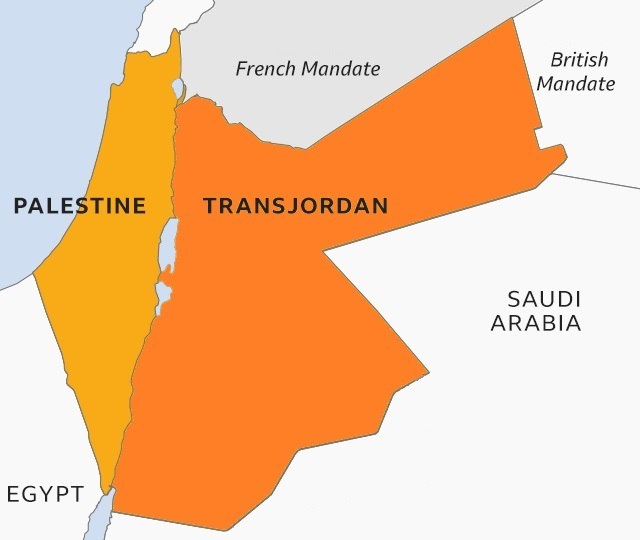 In Iraq, in the suburbs of the city of Kirkuk, a field of high-quality gushing (and therefore cheap) oil was discovered. The task of building the oil pipeline from Kirkuk to the Mediterranean coast has become urgent.

The route exploration was completed, and it was agreed to build the Kirkuk-Haifa oil pipeline. 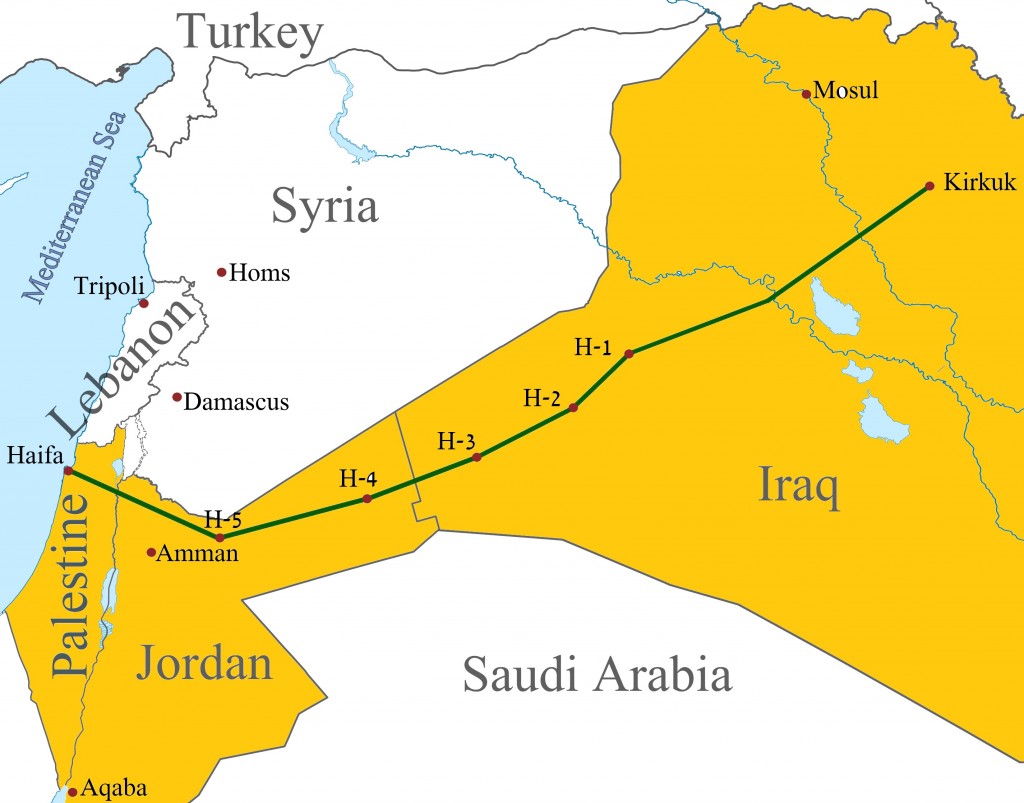 The decision of the British government to start the construction of the Kirkuk-Haifa oil pipeline became a critical point in England’s policy towards Palestine. There was no longer a need to attract Jewish labor and Jewish capital to develop infrastructure in Palestine. From that time on, the policy of the British government related to the repatriation of Jews to Palestine completely contradicted the Balfour Declaration and the wording of the Mandate for Palestine.

The installation of the Kirkuk-Haifa oil pipeline was completed and the supply of crude oil to Europe began.

Haifa refineries began to operate. Throughout the entire period of World War II, they supplied the army of England and its allies with fuel.

The pipeline route and the territory of the factories were declared a zone under the British government’s direct control and outside the sphere of influence of state, municipal, and other Palestinian authorities. They were guarded by the British army, navy, and anti-aircraft artillery.

The State of Israel was proclaimed. The Kirkuk-Haifa oil pipeline ceased to function.

British troops left the territory of the Haifa oil refineries after all oil reserves had been pumped out of the oil storage facilities.

In 1917, the British government was in dire need of cooperation with Jews to set up logistics for the delivery of Mesopotamian oil to the shores of the Mediterranean Sea – the text of the Balfour Declaration is imbued with warmth, sympathy, and a desire to help the Jewish people in “the establishment in Palestine of a national home for the Jewish people”.

In 1931, the British government found a cheap and easy way to deliver Mesopotamian oil to the shores of the Mediterranean Sea – from that moment, it made every effort to prevent “the establishment in Palestine of a national home for the Jewish people”.