Arameans and Hebrews are one and the same people

The English term Jew originates from the Biblical Hebrew word Yehudi, meaning “from the Kingdom of Judah“. It passed into Greek as Ioudaios and Latin as Iudaeus, which evolved into the Old French giu after the letter “d” was dropped. A variety of related forms are found in early English from about the year 1000, including Iudea, Gyu, Giu, Iuu, Iuw, and Iew, which eventually developed into the modern word Jew.

The modern word “Jewish” and the Biblical word “Hebrew” are synonyms. The events described in this article took place in biblical times, that is why we will use the word “Hebrew” for their description.

Here is the first reference to a place named Aram in the Torah.

24,10 And the servant took ten camels, of the camels of his master, and departed; having all goodly things of his master’s in his hand; and he arose, and went to Aram-naharaim, unto the city of Nahor. 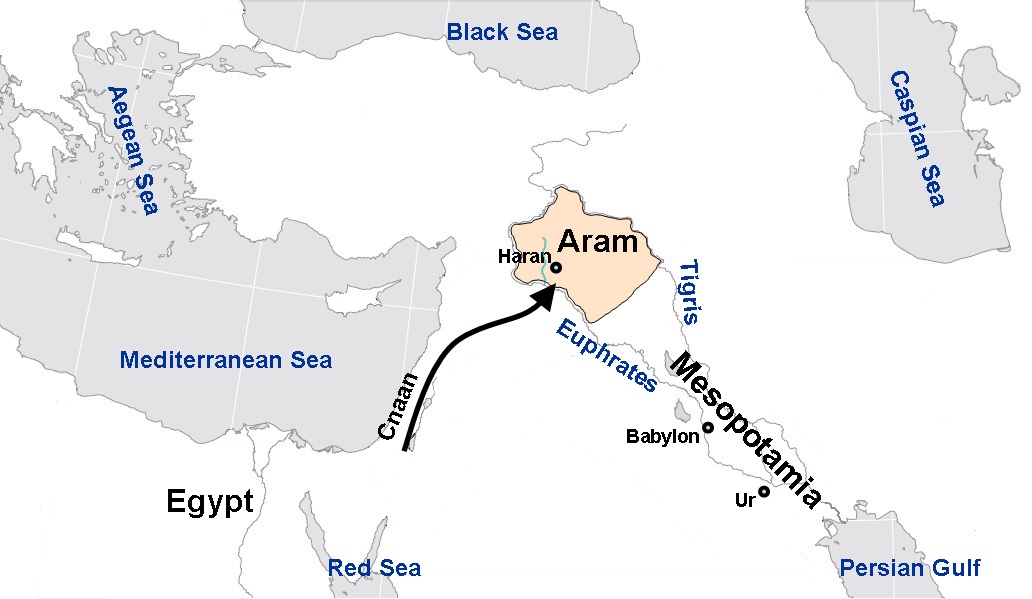 These events happened around 1775 BC. In those days, the northern part of Mesopotamia was called by the name of Aram. For more accurate identification, this area is called Aram-Naharaim due to the following reasons:

*   the equivalent for the word combination “two rivers” in Hebrew is נַהֲרַיִם [naharaim]. The region Aram is situated between the Tigris and Euphrates rivers, so it got the name אֲרַם נַהֲרַיִם [aram naharaim], i.e. “Aram-Naharaim”.

Mesopotamia is surrounded by water on all sides (the Tigris and Euphrates rivers), that is why this area is called الجزيرة [aljazeera] = (Eng) The Island in the Arab countries.

A state referred to as Aram has never existed in this area.

WHO ARE YOU, HEBREWS?

We know where the Biblical Aram was. Now we will investigate who the Arameans are.

The forefather Abraham and his wife, the foremother Sarah came to Canaan from the city of Haran, which was located in Aram.

Foremother Rebekah, the wife of the forefather Isaac, is from Aram. The Torah reports that her father Bethuel and her brother Laban are Arameans.

25,20 And Isaac was forty years old when he took Rebekah, the daughter of Bethuel the Aramean, of Paddan Aram, the sister of Laban the Aramean, to be his wife.

All four wives of the forefather Jacob are also from Aram, two of whom, Leah and Rachel, are the daughters of Laban the Aramean.

Conclusion No. 1: the forefather Abraham and all the foremothers are Arameans.

HEBREWS, YOU ARE ARAMEANS!

The word “Hebrew” is first used in the Torah in the following verse:

14,13 And there came one that had escaped, and told Abram the Hebrew – now he dwelt by the terebinths of Mamre the Amorite, brother of Eshcol, and brother of Aner; and these were confederate with Abram.

The English word “Hebrew” originates from the hebrew word העִבְרִי [haebri], denoting “passed to” – the forefather Abraham and all the foremothers were the first who moved from Aram to Canaan, therefore their descendants were later called “Hebrews”. In biblical times, the word “Hebrew” did not denote a nationality – it was a symbol of a person’s belonging to a group of people who are descendants of six foremothers. As for their belonging to the people, all Hebrews considered themselves Arameans and spoke Aramaic.

RISE OF THE ARAM KINGDOM

In 1624 BC the family of the forefather Jacob descended to Egypt. After about 80 years the power structure in Egypt was changed. The hostile attitude of the new government forces a considerate share of Hebrews to leave Egypt and settle on the shores of the Mediterranean and Black Seas. At this stage (15th-13th centuries BC) they continue to consider themselves Arameans and speak Aramaic, just like those Hebrews who remained in Egypt. 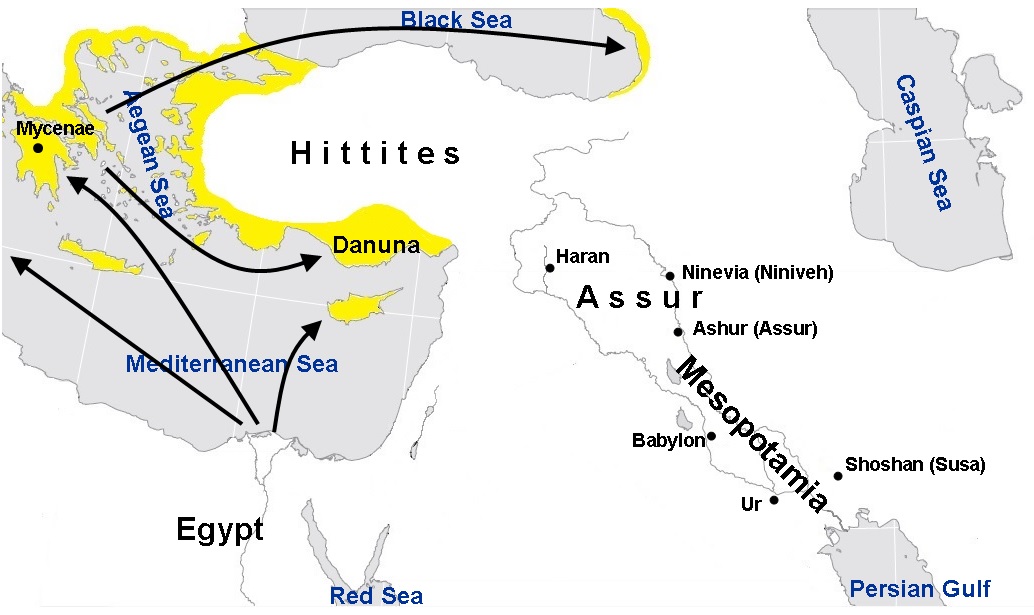 In 1274 BC the Arameans gave battle to Pharaoh Raamses II at the city of Kadesh. 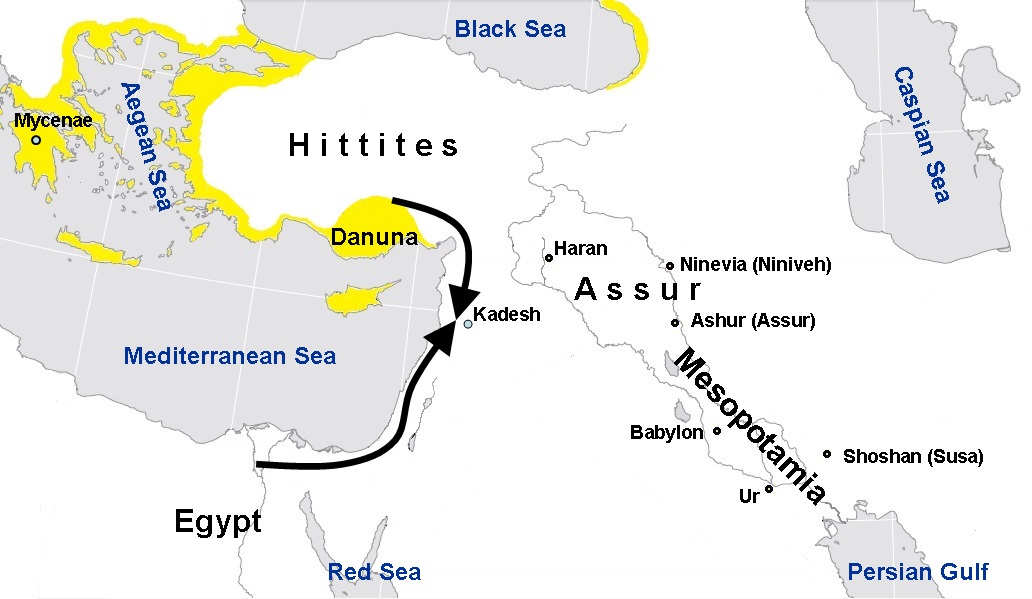 As a result of the victory in this battle, the Arameans advanced south-east and in the middle of the 13th century BC created the Kingdom of Aram with its capital in the city of Damascus. By this time, the area of Aram-Naharaim became part of the Kingdom of Assyria. 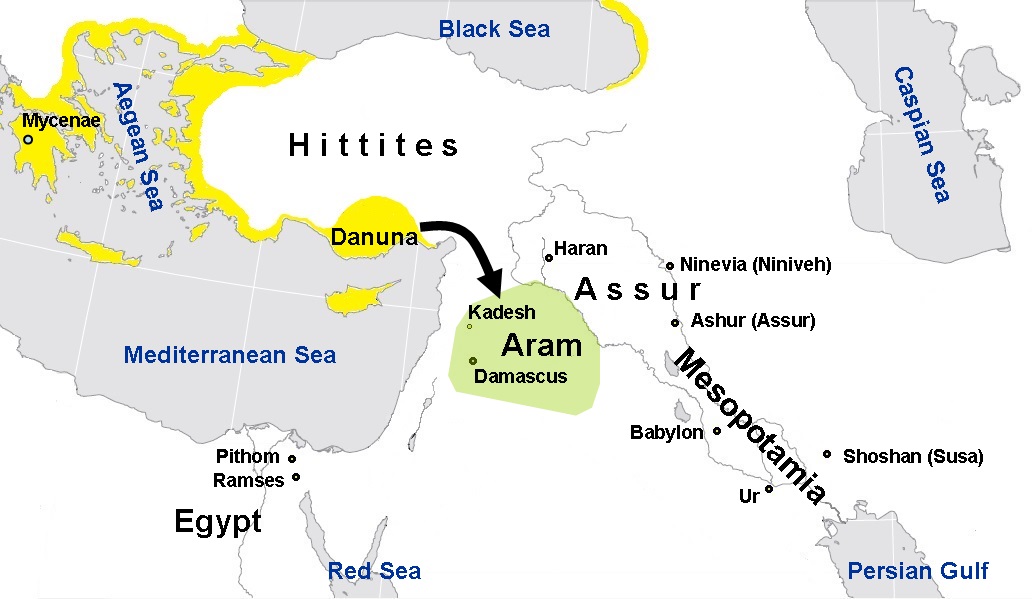 *   the forefather Abraham and all the foremothers were Arameans, as they were from Aram-Naharaim;

* when being in Egyptian bondage, the Hebrews considered themselves Arameans, because they were descendants of the foremothers;

*   the Hebrews in the Mediterranean basin founded the kingdom and named it Aram, since they considered themselves Arameans.

The historical literature refers to the descendants of the forefather Jacob who came from Sinai to Canaan as Hebrews. 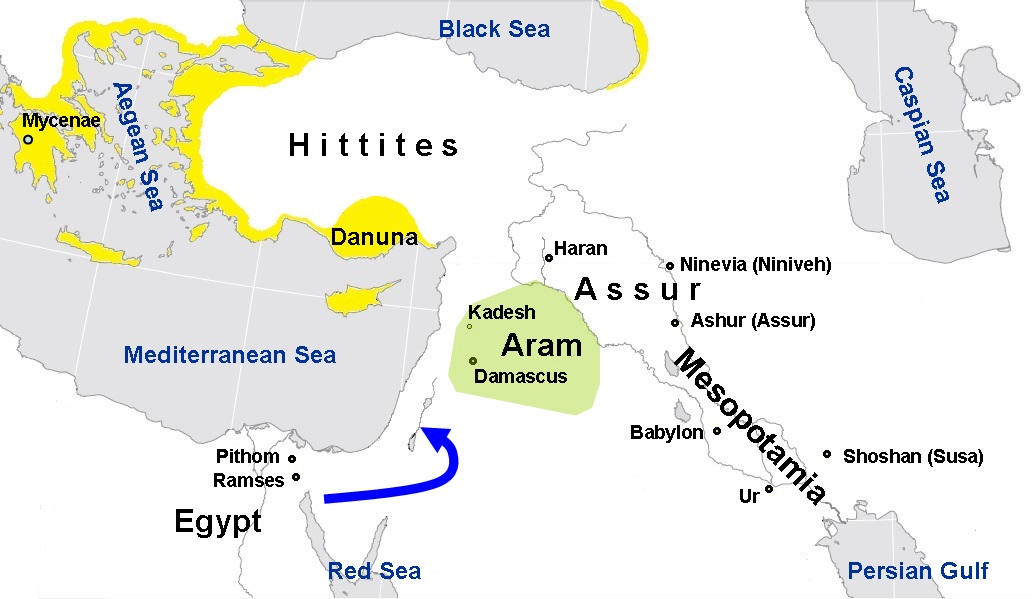 For 40 years in the Sinai desert the Hebrews:

*   created an improved dialect of the Aramaic language, which we call the Hebrew language (the Torah is written in it).

*   brought the Hebrew alphabet to the state which we still use now. Since then, only the form of letters has changed. The number of letters, their sound and meaning remained unchanged.

In 1154 BC the Hebrews entered Canaan and settled there.

Around 1000 BC the Hebrew state arose in the territory of Canaan, which was split into 2 kingdoms: Israel and Judea about 930 BC.

Conclusion No. 3: the Hebrews and the Arameans are two names of the same ethnos.

THE WAY TO GLORY MAY BE PECULIAR

The attitude towards faith in One God differentiated the Hebrews from the Arameans:

*   the inhabitants of Judea had the 40-year experience in Sinai and were united by faith in One God;

*   the inhabitants of Aram were pagans;

*   the inhabitants of Israel, who were believers in the beginning, left the faith and connected with the pagan cults under the pressure of the Aramaic queen Jezebel.

The spread of paganism in the territory of the Kingdom of Israel led to a breakdown in the bonds between people and to the degradation of a person’s sense of belonging to a people.

Around 840 BC, a prophet Elijah received from the Almighty the task of bringing the people of Aram and Israel back to the path of righteousness:

The efforts of the prophets did not help – the Kingdom of Aram and the Kingdom of Israel were defeated by the Assyrian Kingdom in the war of 731 – 701 BC, and their Hebrew pagan population was scattered throughout the world (Ten Lost Tribes).

By a strange coincidence, it was at that time that civilizations arose, which are mentioned as Ancient Greek and Etruscan in the historical literature.