The ambiguity of these relationships is clearly seen in the history of life of a national hero named (Heb) שמשון [Shimshon] = (Eng) Samson. Book of Judges, Chapters 13, 14, 15, 16 – here in 5 – 10 minutes we can get acquainted with the biography of Samson the Hero.

Samson lived in the second half of the 11th century B.C., i.e. several years before King David appeared on the historical scene.

Timna was located on the bank of the Soreq stream. They lived first Samson’s love. Today this archaeological site called Tel Batash. 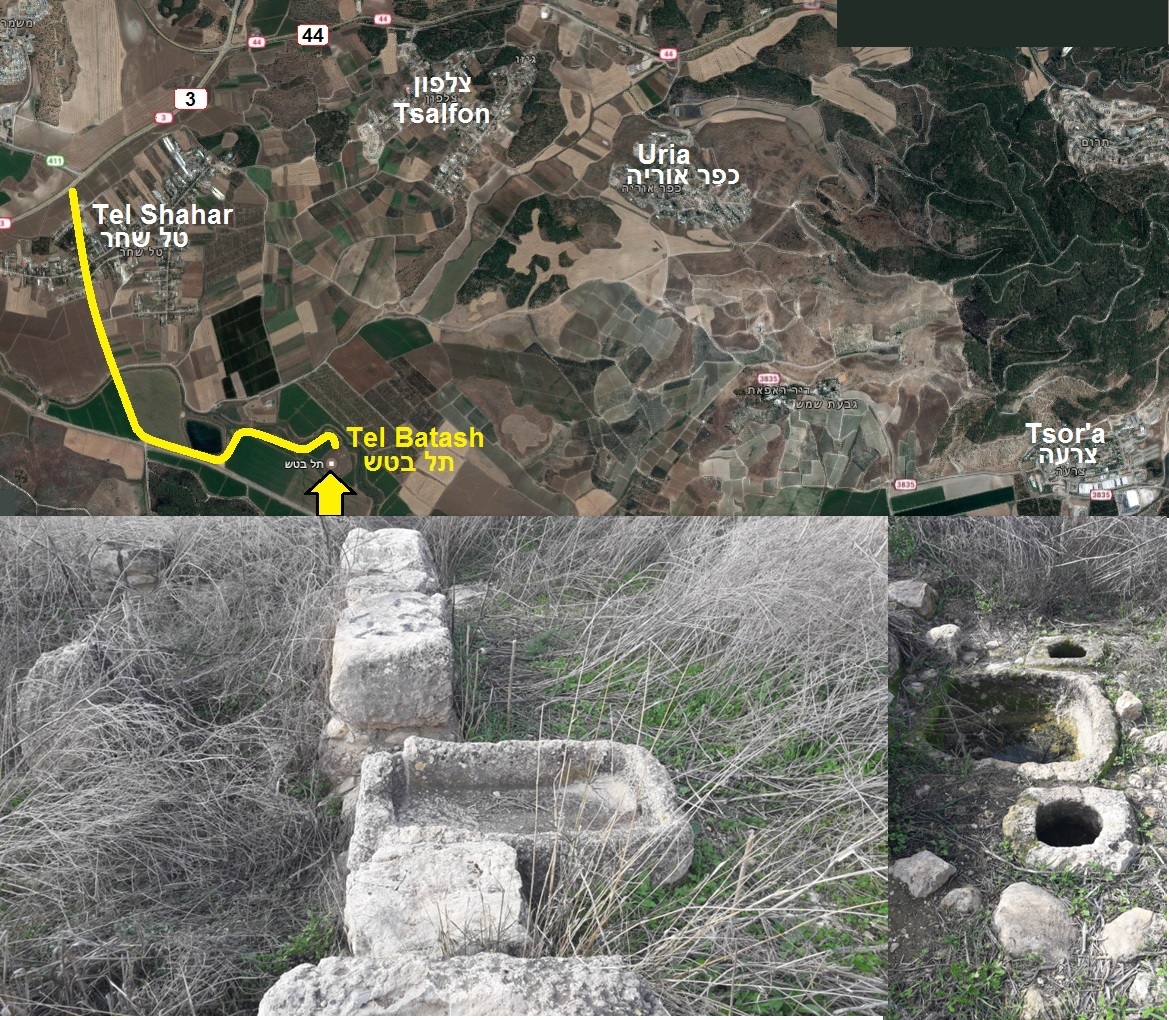 Gaza, Ashkelon, Hebron, Tsor’a, and Eshtaol can be nowadays found in the same places where they were located that time. From other sources we know about such big Philistine cities as אשדוד [ashdod], עקרון [ekron], and גת [gath].

The border between the regions settled by the Philistines and the Jews was quite clearly defined (see the map). But this border was of no importance to Samson, and he traveled freely throughout the whole territory.

The story tells that דלילה [Delilah] betrayed Samson by depriving him of his power and by delivering him into the hands of the Philistines princes. They blinded Samson and brought him to Gaza – far inside the Philistine territory and away from the places where Samson’s relatives could have appeared to rescue him. We can assume that this tragedy of betrayal occurred in one of the Philistine cities, located not far from the Jewish settlements, for example, in Gath.

Below we will tell you why it is important.

ABOUT THE CITY OF RACAL

Among the cities of that time, there was the city of רכל [Rahal or Rakal], mentioned in Prophets, 1 Samuel, Chapter 30:

Unfortunately, this city is not mentioned again anywhere else in the Jewish Scriptures. But if you look in the Septuaginta Seniorum (The Translation of the Seventy Elders), you will find the city of Racal there, but under another name: 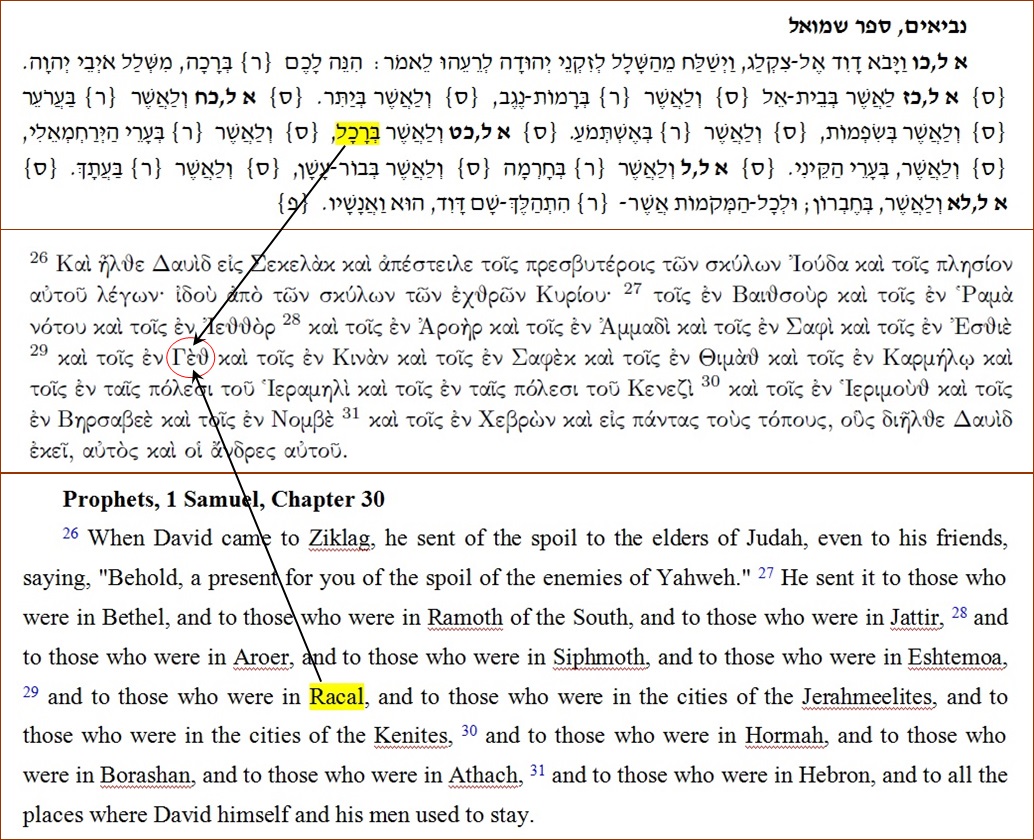 This fact allows us to assume that גת [gath] and רכל [racal] are two names of the same city.

Anyway, in memory of the place associated with the outrageous treachery of Delilah, or perhaps for other reasons, the Jews gave Samson the nickname of הרכלי שמשון [shimshon herakli] = (Eng) Samson of Racal. The story of Samson passed down from generation to generation, and in the end of the 8th century B.C., the Jews escaping from the invasion of the Assyrian king Tiglath-Pileser III (See the article “Full Circle“), brought it with them to Greece. In Greece, the legends of Samson acquired new details, and his nickname got the ending “-s”, typical for the Greek adjectives:

Some researchers of the ancient literature note that the legends about the Labors of Hercules repeat in many respects the bible parable of the Deeds of Samson. And what is so surprising here? They are the stories about the same person.

The events occurred in the city of Racal have remained in memory of the Jewish people. In modern Hebrew, there is a verb originated from this root, i.e. לרכל [lerahel] = to gossip, to slander, to libel.

The root רכל [rakal], with the help of the Greek language, entered other languages, for example:

– (Rus) ракалья [rakalya] – (the meaning of these words is the same as in English)
The biblical story of Samson ends with the following words:

30 Samson said, “Let me die with the Philistines!” He bowed himself with all his might; and the house fell on the lords, and on all the people who were therein. So the dead that he killed at his death were more than those who he killed in his life. 31 Then his brothers and all the house of his father came down, and took him, and brought him up, and buried him between Zorah and Eshtaol in the burial site of Manoah his father. He judged Israel twenty years.

The tomb of Samson and of his father Manoah is located on that very place specified in the Book of Judges, i.e. between Tsor’a and Eshtaol, and everyone can visit it.

ALONG THE WAY OF GOLIATH

The activity of Samson caused some tension in relationships between the Israelites and the Philistines, which, after a while, led to the battle between David and Goliath.

Goliath came from Gath. Here are two quotations from the 1 Samuel:

4 There went out a champion out of the camp of the Philistines, named Goliath, of Gath, whose height was six cubits and a span.

23 As he talked with them, behold, there came up the champion, the Philistine of Gath, Goliath by name, out of the ranks of the Philistines, and spoke according to the same words: and David heard them.

The city of Gath was located a few hundred meters from the stream of האלה [ha’ela]. Nowadays this place is called as צופית תל [tel tsofit] = sunbird hill. Everyone, who is not lazy, can go up from the ruins of the city of Gath about 10 km upstream to the east and visit the place of the historical duel – ha-Ela valley. And it is very possible that he will be going along the same way as Goliath was walking to meet his death.