The legend of the birth of Amalek

To the east of the land of the Philistines, where Jacob lived, there are mountains red in color. Why they are red, see the article “Who are you, Pharaoh?”. The Hebrew for “red” is אדום [adom], hence the name the Edom mountains. 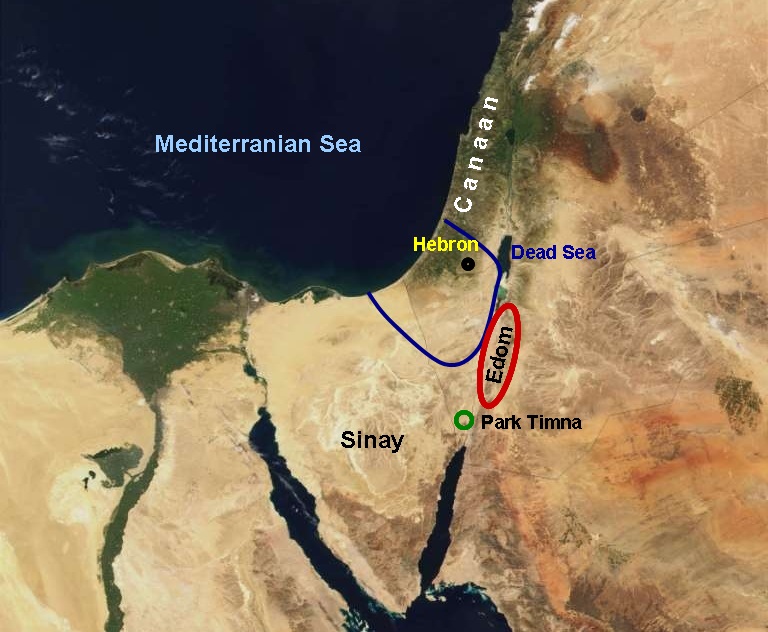 36,6 And Esau took his wives, and his sons, and his daughters, and all the souls of his house, and his cattle, and all his beasts, and all his possessions, which he had gathered in the land of Canaan; and went into a land away from his brother Jacob. 36,7 For their substance was too great for them to dwell together; and the land of their sojournings could not bear them because of their cattle. 36,8 And Esau dwelt in the mountain-land of Seir, Esau is Edom.

The firstborn son of Esau, (Hebrew) אליפז [Elipaz], took after his father –  he was peculiar and did not delve into moral issues. The married Hurrian woman who lived next door got pregnant by Elipaz and gave birth to a girl named (Hebrew) תמנע [Timna].

Timna grew up into a beautiful girl. The time had come and she wanted to get married. The most powerful clan in the area was the Jacob’s clan. And Timna came to Jacob and said: “Look at me. I am so beautiful. Marry me to one of your sons”. But Jacob was reputedly the guardian of morality and proudly replied that his sons would not marry girls born from an extramarital affair.

Then Timna came with the same offer to Esau. He did not dig into details and gave her to Eliphaz (take it or leave it, to her father!). Elipaz and Timna had a son (Hebrew) עמלק [Amalek].

There is no reason to envy Amalek. Even in the very distant past, a child born by an illegitimate mother, and, moreover, as a result of incest, was not well regarded by people around him. Amalek grew up in an atmosphere of contempt and hatred. He became an adult that way – hateful and aggressive.

Esau never forgave Jacob the stolen birthright. Having aged and sensing the approach of the end, Esau called his grandson Amalek and told him: “If it were not for the meanness of Jacob, you would be the favorite of the Lord, and the heir of the Promised Land. You will revenge Jacob’s descendants for his treachery in stead and stall.”

One thought on “The Enemy Never Sleeps”