Why didn’t the forefather Abraham stab Isaac to death?

WHO ARE THEY, THE FIRST HEBREWS?

Here is a quote from the Torah, in which the word “Hebrew” is written for the first time in human history:

14,13 And there came one that had escaped, and told Abram the Hebrew – now he dwelt by the terebinths of Mamre the Amorite, brother of Eshcol, and brother of Aner; and these were confederate with Abram.

The English word “Hebrew” originated from the Hebrew word העִבְרִי [haebri] in the meaning “passed to”, “crossed over”.

The Haran (Harran) district in the land of Aram is the birthplace of the Jewish people. Forefather Abraham and foremother Sarah were the first to move from Haran to Canaan, so they are the first Hebrews. The reasons for this transition are mentioned in the article “Who are you, Pharaoh?”

Figure 01 – transition from Haran to Canaan 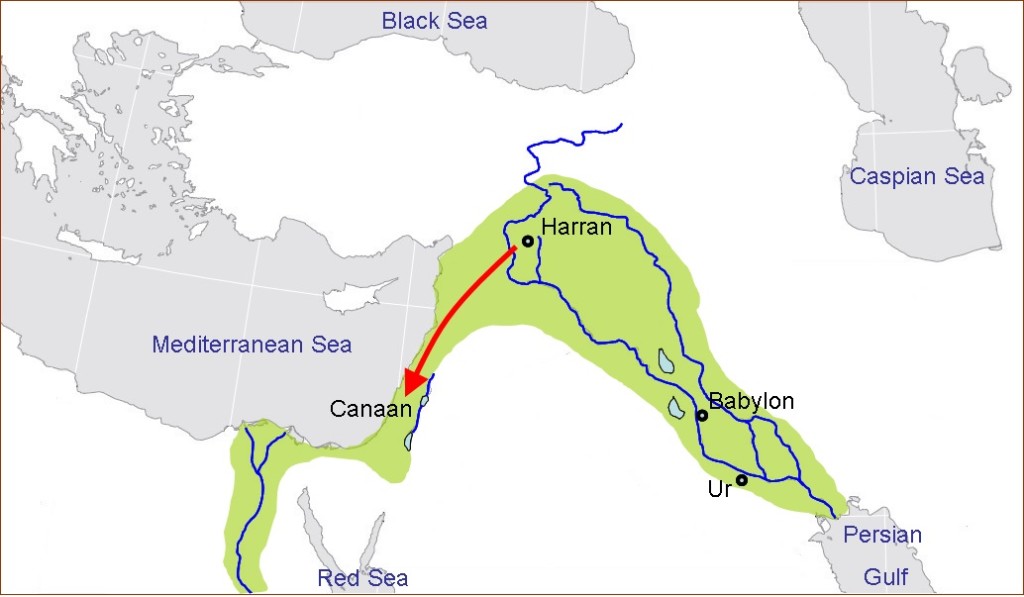 Hebrew man No. 1 got the given name אַבְרָם [avram] = אַבְ + רָם = the great father. After concluding an alliance with God (Torah, book 1 Genesis, chapter 17, verse 5), the Hebrew letter ה [hey] was added to this name, so it slightly changed the sounding – אַבְרָהָם [avraham].

Hebrew woman No. 1 got the given name (Heb.) שָׂרָי [sarai], the root of which is the (Heb.) word שר [sar] = governor, minister. The English word “Sir” originated from this word. Upon concluding an alliance with God (Torah, Book 1 Genesis, chapter 17, verse 15), the Hebrew letter  י [yud] in this name was substituted by the Hebrew letter ה [hey], so the name also slightly changed the sounding – שָׂרָה [sara].

Citation from the Torah:

20,2 And Abraham said of Sarah his wife: ‘She is my sister.’ And Abimelech king of Gerar sent, and took Sarah. 20,3 But God came to Abimelech in a dream of the night, and said to him . . .  20,14 And Abimelech took sheep and oxen, and men-servants and women-servants, and gave them unto Abraham, and restored him Sarah his wife. 20,15 And Abimelech said: ‘Behold, my land is before thee: dwell where it pleaseth thee.’ 20,16 And unto Sarah he said: ‘Behold, I have given thy brother a thousand pieces of silver; behold, it is for thee a covering of the eyes to all that are with thee; and before all men thou art righted.’ . . .  21,1 And the LORD remembered Sarah as He had said, and the LORD did unto Sarah as He had spoken. 21,2 And Sarah conceived, and bore Abraham a son in his old age, at the set time of which God had spoken to him. 21,3 And Abraham called the name of his son that was born unto him, whom Sarah bore to him, Isaac. 21,4 And Abraham circumcised his son Isaac when he was eight days old, as God had commanded him. 21,5 And Abraham was a hundred years old, when his son Isaac was born unto him.

This citation results at least in two conclusions:

There seem to be some questions:

In the Torah we read about Sarah’s pregnancy immediately after she spent one night in Abimelech’s house – a rather transparent hint that Abimelech is Isaac’s biological father. Hint, but not proof! Only Sarah knew the truth. Isaac, out of childish naivety, was sure that he was the son of Abraham, and Abraham lived in the hope that Isaac was his son.

But people around them were not sure of it. It was this doubt floating around that gave Ishmael, Abraham’s eldest son, a sense of superiority and the right to scoff at Isaac.

21,9 And Sarah saw the son of Hagar the Egyptian, whom she had borne unto Abraham, making sport. 21,10 Wherefore she said unto Abraham: ‘Cast out this bondwoman and her son; for the son of this bondwoman shall not be heir with my son, even with Isaac.’ 21,11 And the thing was very grievous in Abraham’s sight on account of his son.

Ishmael, the son of Abraham, mocked Isaac, an illegitimate child. Sarah, upholding her honor and that of Isaac, demanded from Abraham to cast out Hagar and Ishmael – an extremely cruel requirement. In those days, exile was tantamount to death from hunger or thirst. Abraham’s disagreement could be perceived by others as mistrust of his lawful wife Sarah. Abraham expelled the concubine Hagar and his son Ishmael, and thereby showed everyone his full confidence in Sarah.

Nevertheless, the demonstration of confidence and confidence are two totally different things.

WHO IS A MAN HERE?

Abraham was the head of a rather large tribe:

14,14 And when Abram heard that his brother was taken captive, he led forth his trained men, born in his house, three hundred and eighteen, and pursued as far as Dan.

As it follows from the quotation, Abraham had 318 combat-ready men. From this we can conclude that the whole tribe totaled up to 2,000 people. Everyone in the tribe knew that Abraham cast out his son Ishmael upon Sarah’s request, who was defending her apparently illegitimate son, Isaac. That was not a manly conduct, to put it mildly.

For several years, Abraham suffered from humiliated dignity, and in the end it was these sorrows that forced him to seek a solution to the problem with a knife blow.

According to Torah, at the time of the sacrifice Isaac was aged 6 – 13 years. Most likely 6 years old – Abraham would not have been able to bind an older boy.

22,9 And they came to the place which God had told him of; and Abraham built the altar there, and laid the wood in order, and bound Isaac his son, and laid him on the altar, upon the wood. 22,10 And Abraham stretched forth his hand, and took the knife to slay his son.

How did Isaac feel when his father, having bound him, laid him upon the wood and stretched forth a knife over him? What did he see in his father’s eyes at that moment? What did he feel for his father when this nightmare was over? Probably for the rest of his life distrust and fear of the unpredictability of the madman settled in his heart.

And the key question is: why didn’t Abraham slay Isaac?

THE BIRTH OF MORALITY

Abraham lived in a cruel time, when death caused by starvation and death in the battle for food happened every day in front of everyone –  see the article “Who are you, Pharaoh?” Cruelty and mercilessness were part of the routine.

Humiliating rumors and gossip piled up around the circumstances of Isaac’s birth. Abraham’s status as leader of the tribe was shaken. To defend his honor, he decides to get rid of the reason for these gossip – Isaac. At that time, the killing of an illegitimate child would be perceived by others as a common behavior of a real man.

Because he decided not to kill Isaac, even if he had to pay for it with the loss of power and humiliation.

The scene of Isaac’s sacrifice described in the Torah is the first documented episode in the history of mankind in which humanity defeated pragmatism.

Abraham is a special person. He is the first one who, regardless of the logic of survival, implemented the commandment “do not kill”. Abraham was the one who sowed humanity among humankind.

Isaac and Abraham didn’t get along well, but Sarah maintained the family balance.

About 30 years passed. Sarah departed. Abraham buried her in the cave of Machpelah.

Isaac, who was 37 years old, couldn’t live at  Abraham ‘s place. He left his father’s house and settled near the spring Beer-lahai-roi (the Well of the Vision of Life), just steps from the desert of Paran, where Ishmael dwelt.

24,62 And Isaac came from the way of Beer-lahai-roi; for he dwelt in the land of the South. 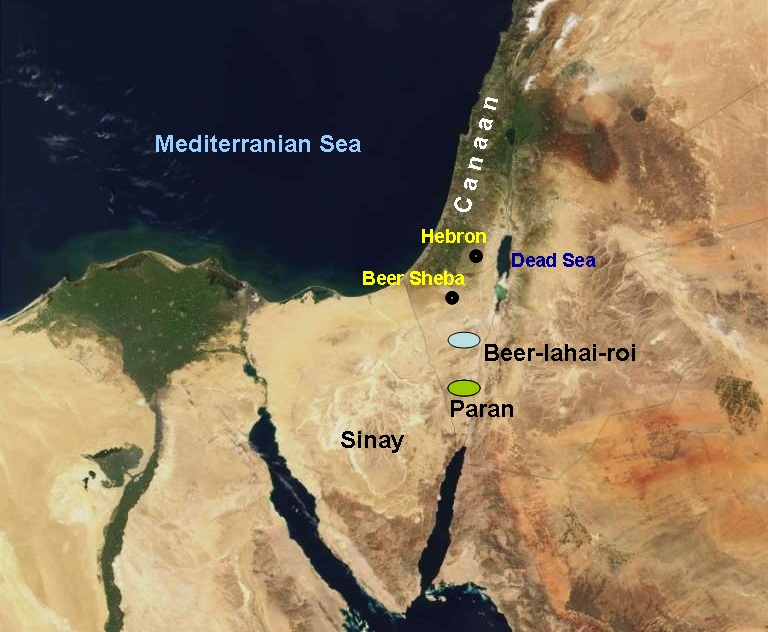 Abraham sent a servant to relatives in Haran to bring Isaac a wife. Rivka (Rebekah) moved from Haran to Canaan, so she is Hebrew woman No. 2 (after Sarah).

24,66 And the servant told Isaac all the things that he had done. 24,67 And Isaac brought her into his mother Sarah’s tent, and took Rebekah, and she became his wife; and he loved her. And Isaac was comforted for his mother.

Filled with gratitude to Abraham for his care, Isaac returns to Sarah’s tent to continue his life near Abraham.

Only after relations with Isaac warmed up, Abraham afforded to take a new wife named Ktura, who bore him six sons.

At the end of life, Abraham decided to appoint an heir.

25,5 And Abraham gave all that he had unto Isaac. 25,6 But unto the sons of the concubines, that Abraham had, Abraham gave gifts; and he sent them away from Isaac his son, while he yet lived, eastward, unto the east country.

Abraham had 8 sons. Ishmael, the son of Hagar, and 6 sons of Keturah were without a doubt his flesh and blood, and he doubted only in Isaac. Why did he choose Isaac as an heir?

The answer is simple: Isaac is the only one of eight whose mother is a Hebrew woman. Was this really the most crucial thing for Abraham? Undoubtedly, yes:

25,7 And these are the days of the years of Abraham’s life which he lived, a hundred threescore and fifteen years. 25,8 And Abraham expired, and died in a good old age, an old man, and full of years; and was gathered to his people. 25,9 And Isaac and Ishmael his sons buried him in the cave of Machpelah, in the field of Ephron the son of Zohar the Hittite, which is before Mamre; 25,10 the field which Abraham purchased of the children of Heth; there was Abraham buried, and Sarah his wife.

After Abraham’s death Isaac returned to Beer-lahai-roi to live not far from Ishmael.

Abraham died in 1739 BC. About 38 centuries have passed since then, however, to this day Arabs and Hebrews pray side by side in the Cave of Machpelah. 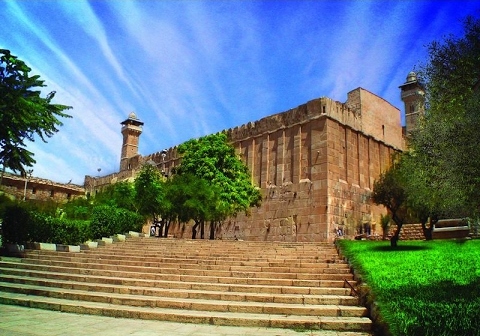 It is no coincidence that the Arabs pray in the Cave of Machpel, particularly, in the Hall of Isaac.

The quote reveals that Sarah was not only a wife, but also Abraham’s sister on her father’s side and, as a result, Ishmael’s aunt.

According to Ishmael, Isaac was not Abraham’s son and, therefore, was not Ishmael’s brother. For this reason, even today, Arabs call Hebrews

“ولاد عمنا” = our cousins, the sons of an aunt on our father’s side.

In memory of those events, the Arabs still have a proverb:

بدك الحق ولا ابن عمٓة؟  =  Do you want the truth, or the son of an aunt on your father’s side?

The relationship between the descendants of Ishmael and those of Isaac are described in the article “Paved with Incense is the Road to…”.

Jacob’s son Isaac had 13 children. Twelve of them were born in Haran and moved to Canaan, so they are Hebrews. And only Benjamin was born in Canaan. Perhaps this is the reason that the Benjamin tribe was subsequently destroyed by the Hebrews (Book of Judges, Chapter 20).

It can be argued that the tribe of Benjamin was not fully wiped out. This is true, but it must be noted that all those 600 warriors, who survived, got Hebrew women from other Israelite tribes, and thanks to these women, the renewed tribe of Benjamin became a full-fledged Jewish tribe.